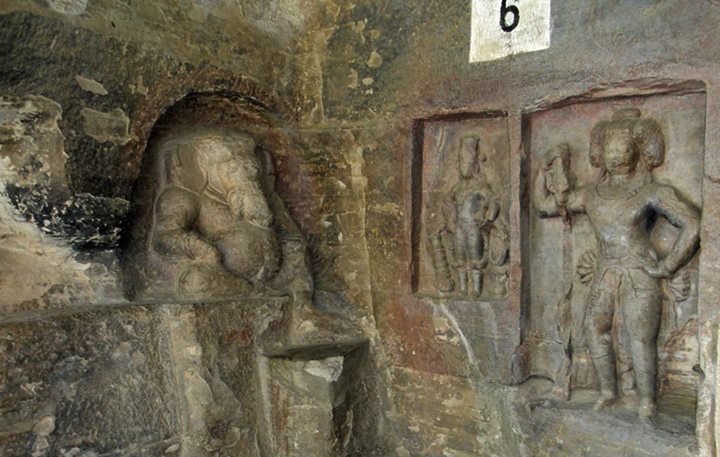 Udayagiri, Cave 6, detail showing Dvārapāla, Viṣṇu and Gaṇeśa in Udayagiri has probably one of the oldest datable Gaṇeśas in India (9th-10th Century).

Ganesha is worshipped by most Jainas, for whom he appears to have taken over certain functions of Kubera. Jaina connections with the trading community support the idea that Jainism took up the worship of Ganesha as a result of commercial connections.

The Jaina canonical literature does not mention the cult of Ganesha.The earliest literary reference to Ganesha in Jainism is in Abhidhānacitāmani of Hemachandra (c.a. third quarter of twelfth century). It refers to several appellations of Ganesha such as Heramba, Ganavigneṣa and Vinayaka and visualizes him as elephant headed, pot-bellied, bearing an axe and riding a mouse.

According to the Swetambara Jaina work, Ācāradinakara of Vardhamānasūri (c. AD 1412), Ganapati is propitiated even by the gods to get desirable things. It is further mentioned that He is worshipped at the beginning of every auspicious ceremony and new project. This practice is still very common in the Swetambara community. The text provides procedures for the installation of Ganapati images.

The popularity is however not met with in Digambara texts. Excepting two medieval figures carved at Udayagiri and Khandagiri caves, Orissa and an early figure at Mathura, his representations are not found in any Digambara sites.

The earliest known Jaina Ganesha statue at Mathura with Jaina Yakshi Ambika(the Jaina name for Gauri).dates to about the 9th century AD. Images of Ganesha appear in the Jaina temples of Rajasthan and Gujarat. In the tenth-century Mahavir at Ghanerav and eleventh-century temple in Osian, Rajasthan; Ganesha images are found.

Cave 6 is directly beside Cave 5 and consists of rock-cut cella entered through an elaborate T-shaped door. The original image inside is missing but it was probably a Śiva liṅga. Outside the cave is a panel with an inscription recording the creation of the 'meritorious gift' (deyadharma), probably the cave and the adjacent images, in Gupta year 82 (401 CE). In the ceiling of the cave is an undated pilgrim record of somebody named Śivāditya.

The door guardians flanking the entrance are regarded by art historians as among the most powerful works of early Gupta sculpture. Beside them, on either side, are figures of Viṣṇu and of Śiva Gaṅgādhāra, the latter much worn from the falling of water over the image. Of special note is Durgā slaying the Buffalo Demon, one of the earliest representations of the theme in India.Of special note also is the figure of seated Gaṇeśa, to the left of the cave entrance, and the rectangular niche with seated goddesses, located to the right. Aside from this being the oldest datable Gaṇeśa in India, the arrangement, with a guarded sanctum in the centre, Gaṇeśa on one side and the mother goddesses on the other, presages the arrangement of temple space in subsequent centuries.

The gaṇesh gumpha gaṇesh is a 10th century addition. Until 10th century ad there was no iconic art in khandagiri udaygiri. Even in the bhubaneshwar state museum collection there is no jain iconic imagery prior to 10 th century AD