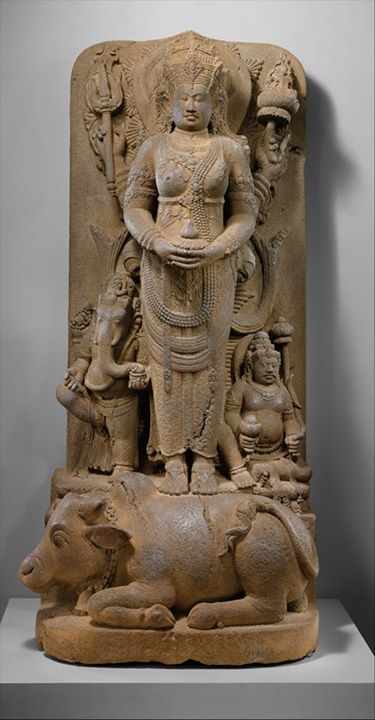 Posthumous Portrait of a Queen as Parvati

Source: The Metropolitan Museum of Art

Beautiful. Any idea why it is not an idol of Parvathy the goddess instead of being attributed to a posthumous queen? Particularly with Ganesha and Shiva? And the bull as her vehicle. With all the symbolism of the mother goddess.

How do you know that it's posthumous?

Probably, the posthumous queen's idol was made in the image of Goddess Parvathi as she was known to the people there. In India, images of gods and goddesses are made according to shilpashastra. Every image has a stotra or shloka as a basis. If the sloka is found, we can decifer the image. In India, you don't find Goddess Parvathi with 4 hands.

Also, if it is a queen, posthumously commemorated in this beautiful sculpture, which, I must say, has very realistic human features,I wonder how many sculptures of goddesses we admire today were modeled posthumously or in real time after existing living models?

This is ShriParvati with Ganesh and Kuber, stolen by white looters and inventing their own labels!