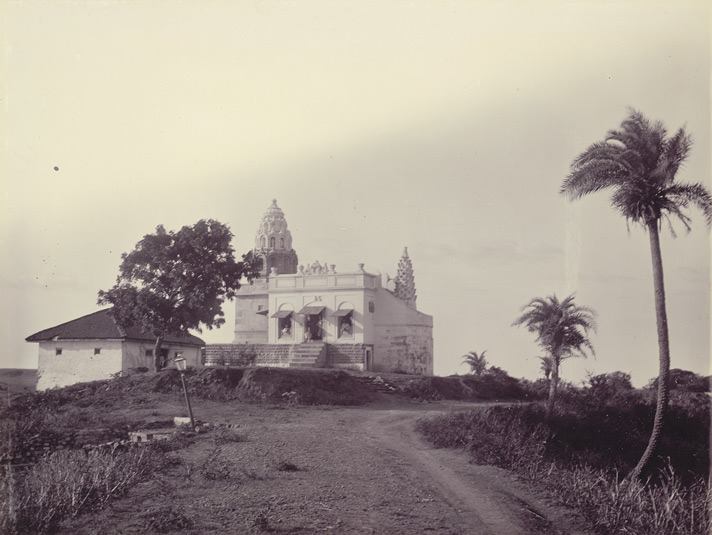 Photograph of the Nawgaon Ganapati Temple at Dhar, Madhya Pradesh, taken by an unknown photographer in c.1902.

Dhar in the Malwa region of central India has a long tradition of history encompassing both Hindu and Muslim rule. It was once the capital of the powerful Rajput Paramara dynasty who ruled from the early 9th century ad as feudatories to the Rashtrakutas or Gurjara-Pratiharas and became independent under Siyaka II in c. 972. The dynasty attained maximum power from the late 10th to the early 11th century under great rulers such as Vakpati II Munja (ruled 974-994) and Bhoja (ruled 1000-1055). The Paramaras were keen patrons of arts and literature. The dynasty then gradually declined and was finally defeated by the Delhi Sultanate (Alauddin Khalji) in 1305. Dhar became part of the independent province of the Sultans of Malwa before passing to the Mughals in the 16th century. It was annexed by the Marathas in the 19th century and retained Hindu rulers till 1948. This temple is dedicated to Ganapati or Ganesha, the popular elephant-headed deity who removes obstacles and who is invoked at the beginning of all enterprises. This is a distant view of the temple, a small building with two beautiful shikharas or towers.