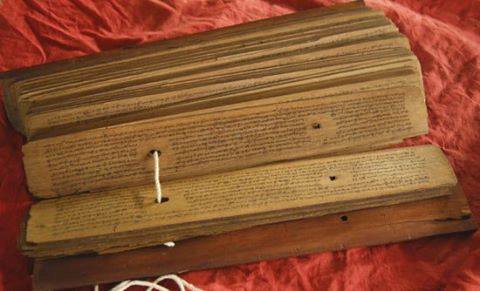 Why is the manuscript of Arthashastra in the Oriental Research Institute at Mysore so important?...

..."Until it was identified from a manuscript by Shamashastry, Chanakya’s opus was know only from references."

The Oriental Research Institute (ORI), set up in 1891 by the then Maharaja of Mysore, is a magnificent heritage building, blending architectural styles such as Gothic, Corinthian and Romanesque, and housing nearly 60,000 palm-leaf manuscripts from antiquity.
What brought fame to the institute, however, was the discovery among them of Kautilya’s Arthashastra some 100 years ago. A manuscript of the treatise on politics and governance, believed to have been written circa 4th century BC, was found and identified by Rudrapatna Shamashastry, a refined scholar of Sanskrit who was the librarian and later the curator of the institute.

Shamashastry came across the work in a heap of manuscripts he was going through. This was in 1905. But it was 1909 by the time he transcribed, edited and published the Sanskrit edition, making the current year the centenary of his landmark publication. He then painstakingly rendered the work into English, publishing it to astounding ovation in 1915, by which time excerpts had already made appearances in journals like Indian Antiquity and Mysore Review, preparing Indologists across the world for the watershed appearance of the English edition.

Read more in the article -
'Year Of The Guru'
by Sugata Srinivasraju
Outlook India - July 2009:

thank you a lot for all your incredible service...every day. i asked many one, over years, very recently the librarian of a over 200 year old institution of national importance...but got the answer from your post

Great feeling being an Indian and a part of ita rich heritage.

Thank you for this gem. Am curious....what script was the original in...apparently not sanskrit.

Thank you for give such priceless material.I realy love it

A Marvellous work.Tq rare book society of India for the valuable contribution& enlightening us