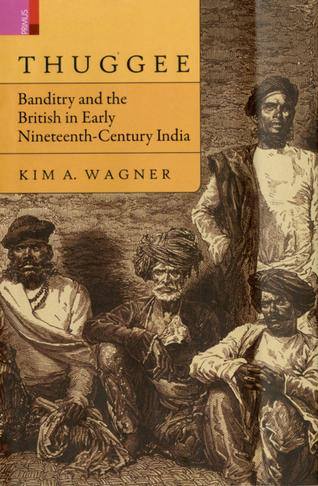 Based largely on new material, this book examines thuggee as a type of banditry, emerging in a specific socio-economic and geographic context. The British usually described the thugs as fanatic assassins and Kali-worshippers, yet Wagner argues that the history of thuggee need no longer be limited to the study of its representation.

Book review:
The lore of Thuggee and how the British ended its reign
By V.B.Ganesan

The lore of the thuggee can be found in abundance in writing from ninth century Bhasarvajna to James Forbes’ Oriental Memoirs (1785). In the seventh century, during Hiuen Tsang’s famous journey to India, he was set upon by bandits on the Ganges and narrowly escaped being sacrificed to their goddess. Similarly, in 1290, Sultan of Delhi Jalal Uddin Firz Khilji expelled 1000 thags from Delhi. The great poet Kabir (1398-1448) often made use of the thag as a metaphor of the divine deceit of God. They are also referred to in the Janamsakhi-texts describing the life of Guru Nanak. (The name was variously spelt as ‘thag’ and ‘thug’ which has been retained in present day English). While Frenchman Jean de Thevenot mentioned them as “the cunningest Robbers in the World”, Englishman John Fryer described an execution of a phansigar (strangler) on the basis of a farman by the Moghul Emperor Aurangzeb in 1672.

According to the conventional account of thuggee, the thugs were a fraternity of ritual stranglers who preyed upon travellers along the highways of 19th century India. Their unsuspecting victims were first deceived into joining the thugs and later at some secluded spot, strangled, plundered and buried. In a sense, a clean criminal act. Kim A. Wagner’s ‘Thuggee – Banditry and the British in early nineteenth Century India’ has written to re-inscribe the thuggee in its historical context and not merely consider it as colonial phantasmagoria. In this attempt Wagner (affectionately called by the present inhabitants of Sindouse (Sandaus in U.P.) as ‘Kim Singh’) has chronicled the thuggee phenomenon — their religious, ethnic and social background, kinship ties, customs and language as well the interaction and cooperation between different gangs. The thuggee was first encountered by the British during a period where the colonial state was still consolidating its rule and authority. With policing and law and order high on the agenda, the thuggee were seen as a blemish on the rule.

The British ‘discovery’ of Phansigars and thugs happened almost simultaneously, in 1807 and 1809 respectively. Dr. Sherwood of Madras Presidency is the first to mention a religious element in the phenomenon. According to him, they were highly superstitious and though some were Muslims, their tutelary deity was the Hindu goddess ‘cali or Mariatta’.

Wagner’s argues that thuggee did not constitute a caste-like identity, and was a livelihood resorted to by all strata of society in certain areas.

Has someone whose read this book comment on how is it?

Can I get a copy of "Thug" by Mike Dash. I believe it is the most authentic account of Thuggery in 18th-19th century India. I shall be indeed grateful.

Kind of British gathers were also branded as thugs by British

Must also read "Thugs or the Phansigars of India" by Col. Sleeman, with the same cover photo.

The original book is written by Philip Meadows Taylor "Confessions of a Thug". In fact, I am in the middle of reading this book right now. Book gives insight into how dangerous it was to travel with money or without money from one place to the other. 100s and 1000s of people disappeared every year without trace. As per the book, Britishers ONLY started going after these Thugee groups after losing few of their soldiers.

The Deceivers Hardcover – 1957 by John Masters. -- Yellow Scarves. ------ THE DIVINE STRANGLERS - A STORY OF THUGS AND THUGGEE SLEEMAN

Doubt if the author has been able to decipher which of the 2 was greater thug- the British/ East Ind Co or these bandits?

Srivi, I can't remember our original discussion, but I do remember you were interested in this subject!

Thugghee word derives from Rajasthani language it self ..... The people who betray called thughee

The confession of a thug too is a good read on this topic. Read it long back, forgetting the name of the author...

Ismile merchant had made one movie on them in year 87;88 the name was Deceiver.

Still there in different form

Will try and get this in UK. Looks interesting.

yes I have read

Can u say from which state dis pic derive from