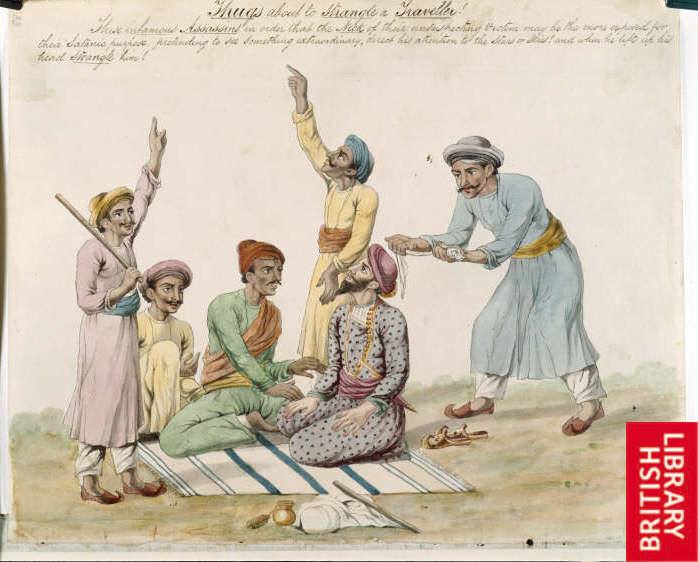 Digital Rare Book:
The Thugs or Phansigars of India
Comprising a history of the rise and progress of that extraordinary fraternity of assassins. And a description of the system which it pursues, and of the measures which have been adopted by the supreme government of India for its suppression.
By William Henry Sleeman
Published by Carey & Hart, Philadelphia - 1839
Volume 2

Image:
A groups of Thugs attempting to strangle a traveller on a highway in India in the early 19th century.
Date: 1829–1840

May I in all humbleness suggest that people consult some of the more recent scholarship on the subject - should they find it worthwhile investing a bit of time reading up on the topic: https://www.academia.edu/442159/Thuggee_Banditry_and_the_British_in_Early_Nineteenth-Century_India

The Thugs were nothing but the remnants of the Pindaris, carrying out desperate guerilla warfare after the losses during the Anglo-Maratha Wars. They were NOT criminals and the records of their alleged 'crimes' are propaganda and nothing less. Company officers themselves have written how the Thugs used to enjoy massive local support- even from princes- and used weapons like rockets and mortars- far more sophisticated than what the English themselves had. Curiously- the records pertaining to Thugs are virtually the same as those encountered during the Sanyasi rebellions in Bengal! What possible other explanation can there be than the Thugs being an anti-foreign insurgency?

Interesting screenshot from the very first page of the book!

How do we rewrite this reality of history :( BUT, there were bandits and dacoits and murderers and cut throats in all cultures, countries, continents...all through time...in the past and in the present too.

foreve trust in hu we are and nothing else matters..