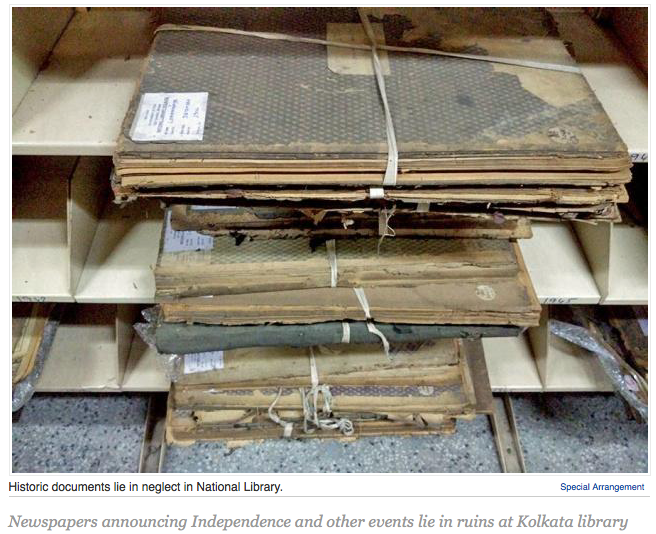 Why it is necessary for collectors to preserve the past...

Where history is set to fade into oblivion
By Soumya Das
The Hindu - August 14, 2016

“India Independent Today,” announced the August 15, 1947 edition of Amrita Bazar Patrika, one of the highest selling newspapers of India in 1947. The headline is placed above the masthead. But, 69 years later, the August 15 edition is so brittle that it is impossible to open it. It is not only the August 15 edition of Amrita Bazar Patrika that is frangible — 20,000 newspapers stacked up in the reading room are either soiled or so fragile that they will all turn to dust soon.

The rare editions are stored in a dusty and dark section on the second floor of Bhasha Bhavan, located in the western part of the 30-acre campus of the National Library at Alipore. The dark room resembles a mortuary where some of the papers are kept in plastic sheets coated with a thick layer of dust. Water leaks out of the air-condition ducts and during monsoon, buckets are placed to catch the droplets.

“About two weeks ago, the room was filled with ankle-deep water,” an employee of the library said. Some of the volumes were “partially drenched.” “Look at this,” a staff member said, “the August 9, 1942 edition of The Statesman with the news of the All India Congress Committee’s endorsement of Mahatma Gandhi’s call for Quit India Movement... The pages crumble even as you try to remove the dust.” The Statesman’s October 17, 1905 edition with a graphic description of Banga Bhanga, or the first Partition of Bengal, was lying next to The Statesman or Amrita Bazar Patrika. Both announced on Page One that Rabindranath Tagore returned his Knighthood on May 30, 1919, in protest against the Jalianwalla Bagh massacre. Both have nearly disappeared.

The employees said the volumes dating back to 1889 were brought to the Alipore campus in south Kolkata three years ago, for microfilming, from the original building of the Library in central Kolkata. Secretary of the National Library Employee’s Association, Santanu Bhowmick, said there had been “no progress” in the microfilming work.

“Perhaps, it [the project] is held up because of the complications in the tendering process,” he said.

Thanks.I have given this suggestions based on my personal experiences. 25 years back I spotted old archival gramophone records and books lying on footpaths uncared.I started collecting them and to day I have been able to pen two prestigious works namely 1.Bajanaama ,and 2.The Wonder That Was the Cylinder. Majority of materials cited in these works have emerged from kabbad and surprisingly r not available with any National or International Libraries. Therefore we must take the lead.

This is the time when we should come forward and preserve such things. A treasure of our history is still on footpaths but we think that its Govts job to preserve.pity on us.

When do we wake up to preserving our history? Our historians are already divided in groups, are committed to further their party agendas. History of modern India is becoming distorted already. With all the evidence crumbling to dust and destroyed by mismanagement, the coming generations will not forgive us. Just remember what happened to Pune Film Archives. Precious film footages got burnt because of carelessness and laxity on the part of the staff. For these institutions, recruitment pattern should change. They should employ those who are interested and dedicated to their job. One should know that Ptolemy family maintained their library for 300 yrs until it was destroyed by christian fanatics.

It is easier said than done.My parents were voracious readers and had a good collection.But the books are more than 80 years.It is very difficult to maintain them.I don't know about the future of these books after I am no more. Can any one one suggest to save these books which no one has the time to read

Deplorable treatment metted out on such rare treasures.

Deplorable don't allow these valuable artefacts to be lost to time

Shocked with the apathy!

That is the work culture in Kolkata!