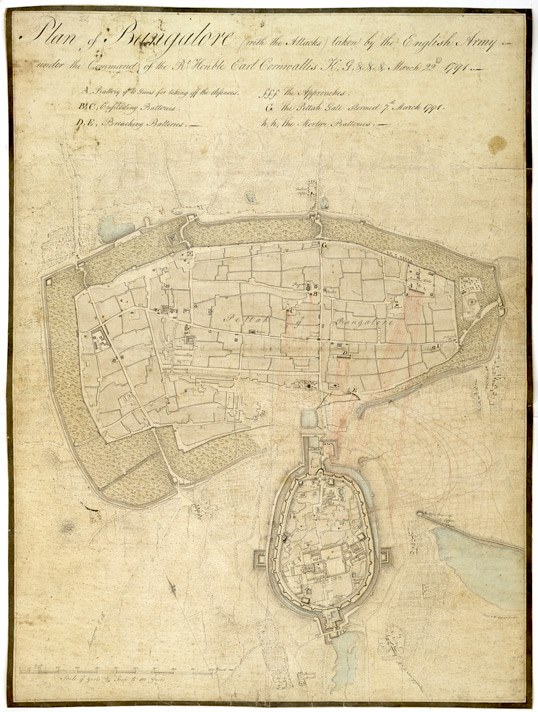 Digital Rare Book :
Select views in Mysore, the country of Tippoo Sultan
Drawing taken on the spot by Mr.Home
By Robert Home
Published by Mr.Bowyer, London - 1794

Image:
Plan of Bangalore (with the Attacks) taken by the English Army under the Command of the Rt. Honble. Earl Cornwallis KG etc. etc. etc. March 22nd 1791.

Ink wash of a plan of Bangalore by Robert Home (1752-1834) in 1791. This is part of a series of 22 loose drawings together with a map and three plans completed by Home when he accompanied the British army under Cornwallis during the 3rd Mysore War 1791-1792.

Bangalore and its fort were founded by the Hindu ruler Kempe Gowda in the 16th century. In 1761, the fort was reconstructed in stone by Haidar Ali (r.1761-1782). The fortress was built in an unusual oval shape with eight gates, only one of which survives today. On 21 March 1791, Bangalore fort was captured from Haidar's eldest son Tipu Sultan (r.1782-1799) by the British. In the 19th century, Bangalore became a prominant British garrison town.