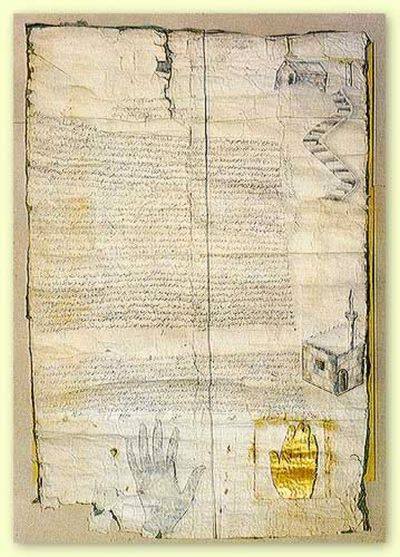 "These are further complemented by other Arabic manuscripts from early middle ages, including the copy of the Ashtiname of Muhammad, in which the Islamic prophet is claimed to have vouched for offering his protection to the monastery. Other ‘points’ of the Ashtiname (‘Holy Testament’) alluded to granting exemption from taxes and military service for the Christian monks of the monastery when under Muslim rule. Though it should also be noted that some scholars have presented their viewpoint regarding how the Ashtiname was possibly forged by the medieval monks of Saint Catherine. In any case, irrespective of the document’s authenticity, in rare situations, Muslim soldiers from 11th century Fatimid Caliphate were even called upon to protect the monastery and provide the monks with logistical aid."

Image:
16th century copy of the Ashtiname of Muhammad.

Image is very dim not able to understand