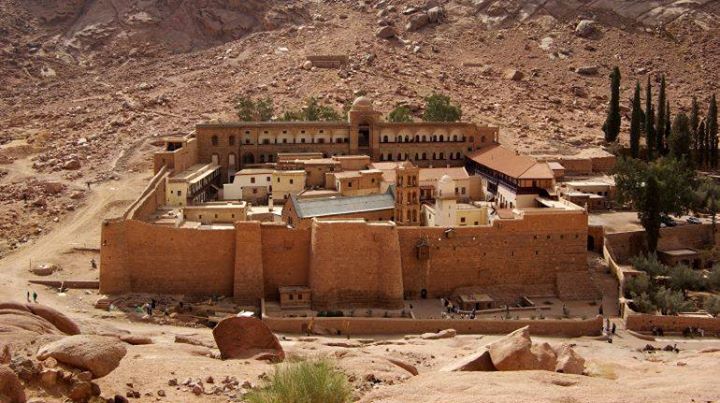 The Sinai Peninsula and especially its summit of Mount Sinai, is considered as one of the most religiously significant places in three Abrahamic faiths – Christianity, Judaism and Islam. Suffice it to say, much like its ‘northern’ counterparts in Levant and Jerusalem, the area is home to a bevy of historical legacies. And one of the prominent (and still existing) ones among them pertains to Saint Catherine’s Monastery, situated by the gorge at the foot of Mount Sinai. Considered as one of the oldest functioning Christian monasteries in the world, the UNESCO World Heritage site also holds on to an arguably greater honor – it proudly houses the world’s oldest continuously operating library.

Founded sometime in 6th century AD (possibly between 548-565 AD), the monastery was probably constructed on the orders of Eastern Roman emperor Justinian I. In fact, according to some traditions, this building was built so as to enclose the older Chapel of the Burning Bush, a structure originally patronized by the mother of Constantine the Great, Empress Consort Helena. Given such ‘antiquated’ credentials, it is generally believed that the king post truss of the Saint Catherine’s Monastery is the oldest surviving roof truss in the world.

As for the ancient Roman monastery’s extant library, the establishments boasts the world’s second largest collection of ancient codices and manuscripts, after just Vatican City. To that end, the most important literary specimen arguably relates to the Codex Sinaiticus — the oldest known complete Bible (circa 345 AD) that was discovered inside the premises of Saint Catherine’s Monastery in 19th century by biblical scholar Constantin von Tischendorf. The impressive collection also includes a range of works composed in Syriac, which in itself pertains to a literary language derived from an eastern Aramaic dialect. The Syriac-based literature entail specimens like a 5th century copy of the Gospels, a copy of the Lives of Women Saints (from 779 AD), and a copy of the Apology of Aristides (the original Greek version is still lost).

Interesting the Muslims Andy's Greek Orthodox Christians get along... the government of Egypt gave them up hundreds of years ago