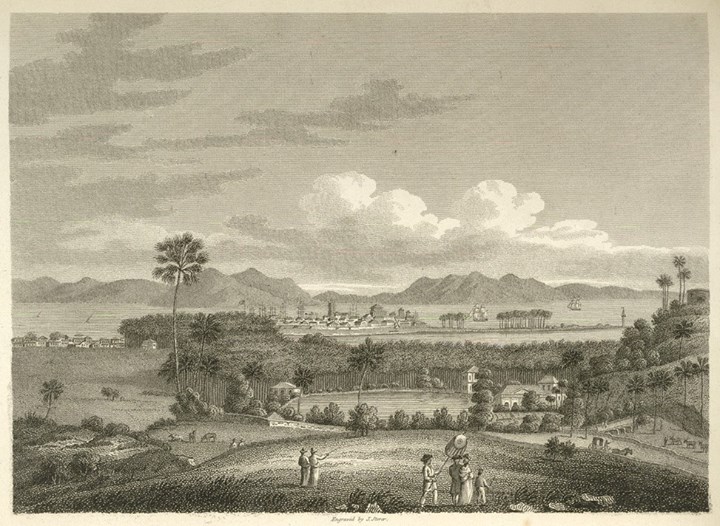 View of Bombay, from Malabar Hills, with the Island of Caranjah and part of the Indian Continent in the distance - 1813

Plate twenty-two from the first volume of James Forbes'"Oriental Memoirs". Forbes(1749-1819)had arrived in Bombay in 1766 and spent eighteen years of his working-life in this region. Referring to the plate, Forbes(1749--1814)wrote,'This view contains the fortified town, and harbour of Bombay, connected with Colaba, or Old Woman's Island; beyond the harbour and shipping are the Island of Caranjah, and the high land on the continent. The nearer landscape represents the country at Bombay, consisting chiefly of Cocoanut woods and rice-fields, interspersed with English villas and plantations. Those in this engraving are the Retreat and Tankaville, on the borders of a tank of fresh water, near Malabar Hill; on which is seen one of the Parsee tombs, or large open sepulchres, where the corpses are exposed, to be consumed by vultures and other birds of Prey.'

This may be taken from hill near Sion station as Sion fort and lake at the base of the hill is seen there.

I tool this pic in Mumbai last year, while going from Airport to Thane..Is it possible that both pics are of same area??