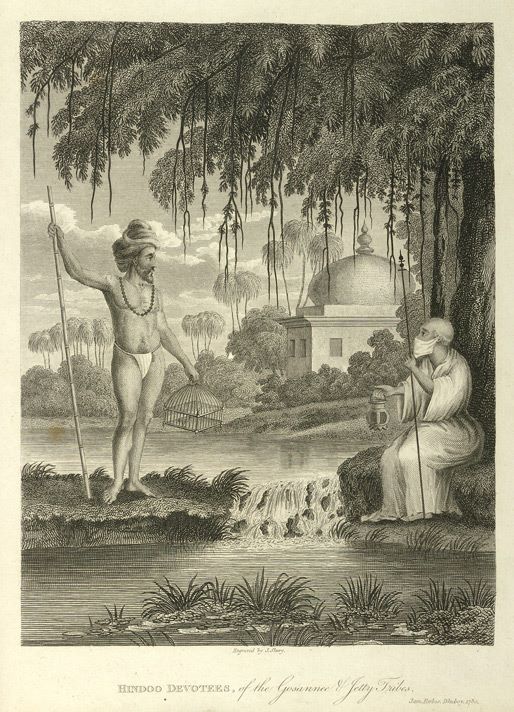 Image:
Plate sixty-six from the second volume of James Forbes' "Oriental Memoirs". Forbes(1749-1819, a keen observer of the manners and customs of the local inhabitants and the wandering 'holy men' described many in his letters to friends. The huge banyan on the island in the river Narmada was the favourite haunt of many of these 'holy men'.To quote Forbes: 'I beheld...reposing under the friendly banian-tree, the Gosanee in a state of nudity, and the Yogee with a lark or paroquet, his sole companion for a thousand miles: the Guroo, of the first rank in the brahminical hierarchy, travelling with oriental pageantry to visit the temple and superintend the seminars, meeting the brahmacharee (pupil), with a covered mouth and nostrils, that he may not inhale an animacule; and a soft broom to sweep the ground that he may not tread on an insect.'

A Jain and a Naga Sadhu

No one jain in this picture

Its a sthanakwasi Jain monk on the right side.

The hermit sitting under the tree seems a jain sadhu, one can find them similar looking, even these days.