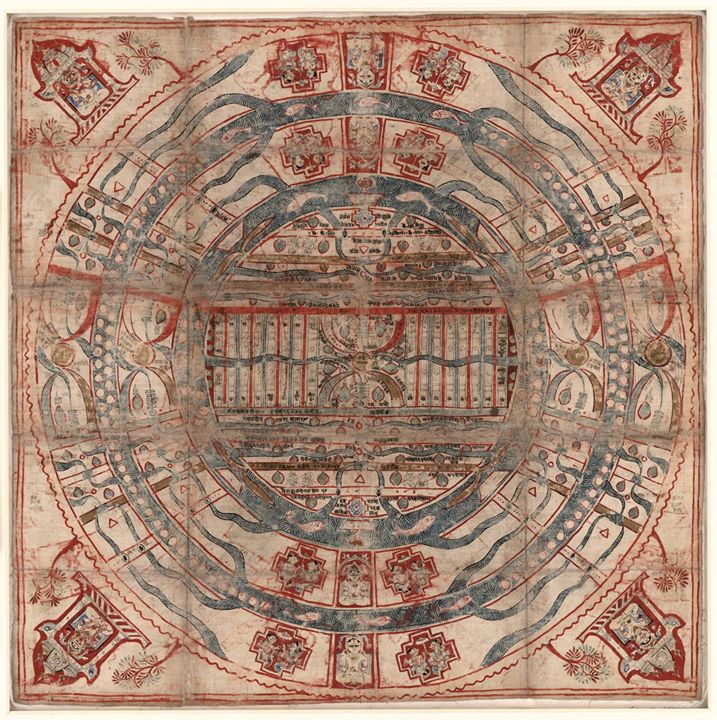 Jain cosmological mandala: plan of Adhaidvipa, or the two and a half continents where mortals dwell. In Jain cosmography the universe is divided into three kingdoms: the upper, occupied by the celestials; the middle, by the mortals; and the lower, belonging to the damned and the disorderly. The continents, which are concentrically arranged, are separated by two ring-shaped oceans. The central continent is Jambudvipa, the continent of the rose-apple tree. Lines and tusk-shapes representing mountain ranges can be seen as well as blue wavy rivers. Four pairs of tusk-shaped promontories project into the inner ocean or Lavanasamudra (Ocean of Salt). At the very centre is Mount Meru. The part of the outermost continent inhabited by mortals is bounded by a chain of mountains. Annotations on the map are in Devanagari script, probably in the Rajasthani dialect of Hindi, and give details of the lands, rivers and their dimensions. In each of the four corners sits a Jina or Tirthankara, one of the 24 Jain saviours (called victors or ford-makers), in meditating posture.

Link for an enlarged picture: http://bit.ly/2awOto1