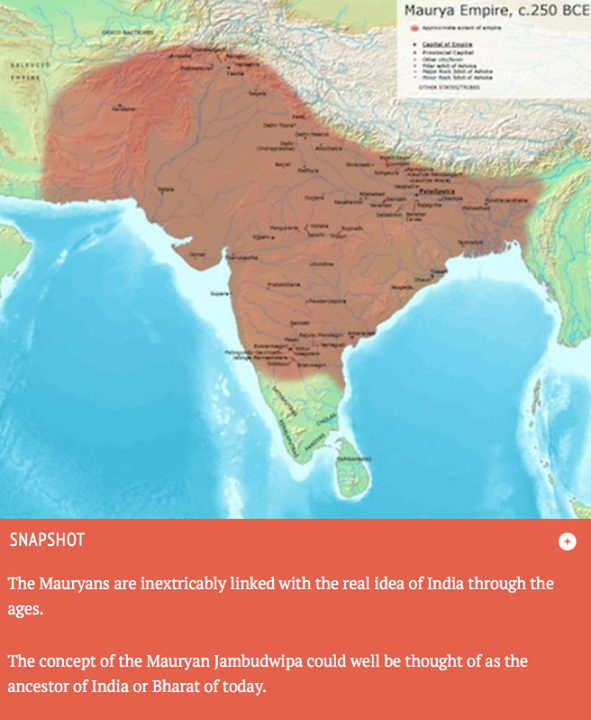 The peacock flag of the Mauryans was the first to unify the Indian subcontinent under one political rule. From the Kubha River of modern Kabul in the north to the Vaigai River of Madurai in the south, Saurashtra on the coast of the Sindhu Sagar in the west and the Gangasagar Sangam of the Bay of Bengal in the east – the dwipa-chakravartin ruled them all 2,300 years ago.

The name Jambudwipa comes from the sapta-dwipa vasumati formulation of antiquity and was consciously used by the Mauryans to refer to the kingdom.

From the emerging contours of the civilisation on the banks of the Sindhu and the Saraswati dating to nine thousand years ago, the scattered settlements of the intermediate periods, the emergence of the Vedic Age, the efflorescence of the sixteen janapadas that led to the primacy of Magadha and then that of the Nandas and the Mauryas, it was a long journey for the subcontinent.

The brain behind the political unification was that of Chanakya, whose legacy is with us in the form of the Sanskrit-language treatise, Arthashastra; the sword was that of Chandragupta, the son of a goatherd, a boy picked out for his destiny; and that of Jambudwipa, by Chanakya, according to legend.

Did the Mauryas ever claim to have ruled over the Cheras, Cholas, Pandiyas and Sathyaputhras? Even the map above doesn't show that. The paragraph about "friendly intervention" seems to be a stretch.

Not ruled over; they are mentioned as friends in Ashokan inscriptions and welfare activities carried out in their kingdoms are mentioned, too. Also refer to Mamulanar's poetry for the friendly interventions description. KA Nilkanta Shastry's India during the Nandas and the Mauryas for an overview.

And then there are people who want to be in a continuous denial mode over accepting the oneness of the north and the south.They just want to stir hatred by exaggerating their self made theory of Aryans and Dravidians.We have to accept that the variations which have arised are only regional not cultural. A devotee takes the pious water of Kailash Mansarovar(Tibet) to offer it at Rameshvaram(Tamil Nadu), this fact tells us about our one culture.All dance forms including bhangra(punjab), gher ghoomar(rajasthan),kuchipudi, bharatanatyam, mohiniaittam,etc offer reverence to Lord Ram, Krishna ,Shiva or Maa Durga, in one way or the other, this fact announces our homogeneity.The pandits in the temples of Benaras (U.P.) are brought from Tirupati Veda Sansthan(Andhra Pradesh) and other South Indian states just because the same hymns from the same Vedas are enchanted throughout India and that the South Indians are well versed in Sanskrit and Vedic texts.The Ramcharitmanas written by Tulsidas ji and Shri Krishna Charitra poetry by Surdas ji ,both from North India, deeply influence the devotees of Shri Tirupati Balaji and Shri Padmanabh Swamy (both are forms of Lord Vishnu) only because we have same feelings for our "GOVINDA" or "KANHAIYA".The entire modern-day Hinduism is based on the foundational pillars of the principles of Non-Dualism and Dualism by Adi Shankaracharya and Shri Madhavacharya respectively, both of whom have been from South India, but were welcomed wholeheartedly by the sadhus of other provinces for religious sermons and debates.The setting up of the 4 dhaams, the most pious in the Hindu Dharma, Shri Badrinath(Uttarakhand), Shri Jagannath Puri(Odisha), Shri Rameshvaram(Tamil Nadu) and Shri Dwarka(Gujrat) was possible only due to the continuous endeavor of Adi Shankaracharya and the patronage of the concerned kings, just to orchestrate and celebrate our common ancestral roots,which after transcending down the generations took varied forms, though remaining one in spirit. Just ask a simple question to yourself.How were these things possible? It's because those people had nothing political and could feel that a single mellifluous and euphonious sound of the Vedas resonates throughout the subcontinent, enlightening and tranquilizing the soul of its inhabitants, making this place a substratum of virtuous attributes. Stopping here, but do think for a while before fighting over the aryan-dravidian theory.

If anything Mamulanaar's poetry describes an alliance of Tamil kings against the Mauryans. I am curious to understand your explanation for the following para that seems to be wild speculation. Are there any research articles to support these claims? "In the south, Mauryan remains have been found up to Madurai, and there is mention of the Cholas, Cheras, Pandas and Satiyaputas, friends of the Mauryans, in Ashokan inscriptions. That the Mauryans exercised ‘friendly’ intervention and interference into the affairs of these kingdoms is attested to by some poets of the Sangam period, such as Mamulanar, Attiraiyanar and Parangorarnar. According to Buddhist sources, the Sri Lankan kings paid tribute to the Mauryans too."

Aryan came from outside " this is not true, just a propaganda

Exactly sir , just a propaganda.Morever , on searching for the two terms ,"Aryans " and "Dravidians"in ancient Sanskrit texts ,we would come to know that these terms are more regional than cultural.But Communists want to have their own theory so as to divide us and prove their supremacy over us.And since our country's reign stretched to west and parts of central Asia, archaeological remains related to our culture can be found there.But this fact doesn't prove that Aryans immigrated from Central Asia.

Mauryas were the first great empire of India as shown in the map. The mugals probably covered the same geography?

Good write-up. Sumedha Verma Ojha should expand this into a book.

The series is already on...The sequel to Urnabhih should be out soon.

மணி மணிவண்ணன் Since I will not have the space to discuss this here please do read all of K A Neelkanth Shastry's books with special reference to the Vamba Moriyars, the Kosars and Vadugars. For inscription; Romila Thapars book ( or any other that you like) on Ashokan inscriptions. and for Buddhist sources the Mahavamsa and the Deepvamsa. A general history book such as Upendra Singh on ancient and medieval history till the 12th century will also give you information on this.

I have. That is why I am surprised by this stretch. Look, the Asokan empire is NOT modern India. Afghanistan, Pakistan, Nepal, Bangladesh are all independent countries. And Indian cultural influence spread to south east Asia among people who were ethnically, linguistically and culturally different and now are independent nations. The wonder of modern India founded on western civilizational models, values and systems is that it brings together diverse ethnicities, cultures, languages and religions. It is not a monolithic empire with one culture, one religion, one language and one ethnicity. Any attempt to make India a colony of people of the gangetic plains will be resented.

Nilakanta Sastri was known to be a biased researcher. For example: “"Literature in all Dravidian languages owes a great deal to Sanskrit, the magic wand whose touch raised each of the languages from a level of patois to that of a literary idiom" (K. A. Nilakanta Sastri, History of South India, 1955, p309) This is now a discredited opinion. Scholars of his era had a strong gangetic plains and north as center of civilization bias. As Prof George Hart of Berkeley often has said, Tamil Nadu was not a blank slate and Tamils were not barbarians waiting to be civilized by the North Indian conquerors. But habits die hard.

An empire is by its very name a union of vassal states ruled by a central authority...india... modern india... thankfully is not yet that... although there have been historical pushes to centralise throughout the past 70 years after independence.... political union is one thing no one disagrees on...but religious union especially of the ultra-brahamanical version of Hinduism practised by the cow belt (the only parallel which comes to mind is the Saudis salafism) and claiming linguistic dominance is a sure fire way of degrading the very unity in diversity the martyrs of the freedom struggle fought to achieve in free india

Common ! Gentlemen, we are offshoots of Cholas in Eastern India and SEA ! Courtesy to adventures to new regions like Bengal (that time divided into 7 different regions) ~> few moved to western India and North Western India beyond, we studied and researched about Gothra, Genetics (Haplotypes) and Blood group... There are some other controlled group investigation too ! Chola+Ang + Ki = Cholangki, Solanki, Solangi in Balochistan etc etc.... Same in Johor (Malaysia) - quite deep.