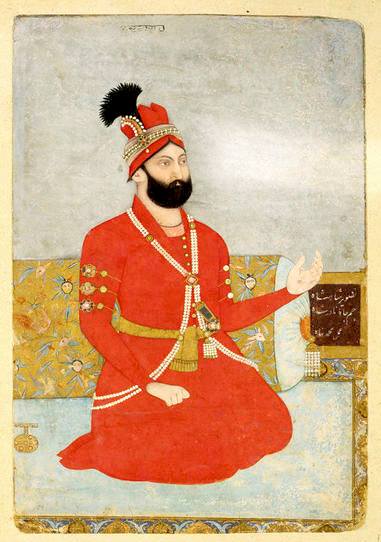 Digital Rare Book:
The History of Nadir Shah: Formerly Called Thamas Kuli Khan, the Present Emperor of Persia
To which is prefixed - A short history of the Moghol Emperors
By James Fraser
Printed for A. Millar, London - 1742

The portrait of Nadir Shah of Iran (r. 1736-47) was done in the north of the subcontinent, possibly in Delhi, and is signed by the artist, Muhammad Panah. Another version, also naming Muhammad Panah and dated 1742, is in the Bodleian Library in Oxford. The brilliant red of Nadir Shah's robe stands against the silvery grey background and pale blue rug to provide a powerful image of the man who swept into India from Iran in 1738 and looted the Mughal treasury in Delhi. He removed vast quantities of jewels (including the Koh-i nur diamond and the gem-incrusted throne of Shah Jahan, the 17th century Mughal emperor), and manuscripts from the royal library. The ruler and the artist are identified in the Persian inscription on the right, and a later inscription in Gurmukhi script on the back repeats Nadir Shah's name.

How Kohinoor then came into possession of maharaja Ranjit singh