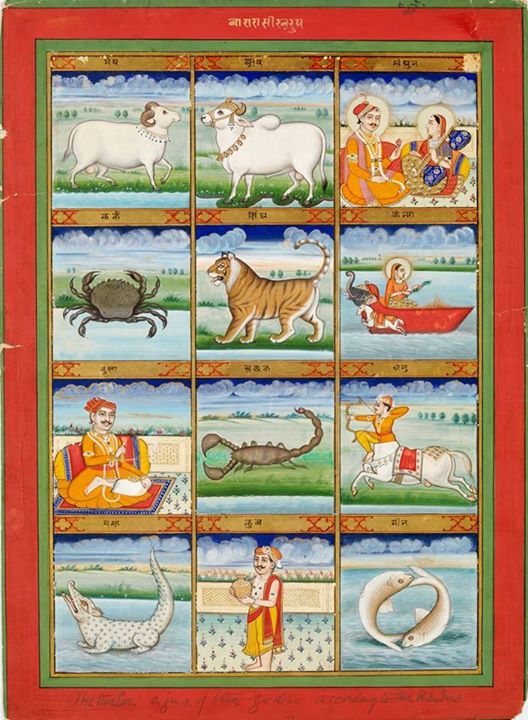 Marks and inscriptions:
'The twelve signs of the zodiac according to the Hindus'

Why Simha or a lion is shown here as a tiger?

clarification needed - is this book about astrology or astronomy?

Because tiger is at home in India!

So far as this image is only about astrology.

Indian astronomy has a long history stretching from pre-historic to modern times. Some of the earliest roots of Indian astronomy can be dated to the period of Indus Valley Civilization or earlier.[1][2] Astronomy later developed as a discipline of Vedanga or one of the "auxiliary disciplines" associated with the study of the Vedas,[3] dating 1500 BCE or older.[4][better source needed] The oldest known text is the Vedanga Jyotisha, dated to 1400–1200 BCE (with the extant form possibly from 700–600 BCE).[5] As with other traditions, the original application of astronomy was thus religious. Indian astronomy was influenced by Greek astronomy beginning in the 4th century BCE[6][7][8] and through the early centuries of the Common Era, for example by the Yavanajataka[6] and the Romaka Siddhanta, a Sanskrit translation of a Greek text disseminated from the 2nd century.[9] Indian astronomy flowered in the 5th-6th century, with Aryabhata, whose Aryabhatiya represented the pinnacle of astronomical knowledge at the time. Later the Indian astronomy significantly influenced Muslim astronomy, Chinese astronomy, European astronomy,[10] and others. Other astronomers of the classical era who further elaborated on Aryabhata's work include Brahmagupta, Varahamihira and Lalla. An identifiable native Indian astronomical tradition remained active throughout the medieval period and into the 16th or 17th century, especially within the Kerala school of astronomy and mathematics. https://en.wikipedia.org/wiki/Indian_astronomy

Astrology and astronomy were archaically treated together (Latin: astrologia), and were only gradually separated in Western 17th century philosophy (the "Age of Reason") with the rejection of astrology. During the later part of the medieval period, astronomy was treated as the foundation upon which astrology could operate.[1] Since the 18th century they have come to be regarded as completely separate disciplines. Astronomy, the study of objects and phenomena originating beyond the Earth's atmosphere, is a science[2][3][4] and is a widely-studied academic discipline. Astrology, which uses the apparent positions of celestial objects as the basis for the prediction of future events, is defined as a form of divination and is regarded by many as a pseudoscience having no scientific validity. https://en.wikipedia.org/wiki/Astrology_and_astronomy

The pictures in this painting depict the 'RASHI's.