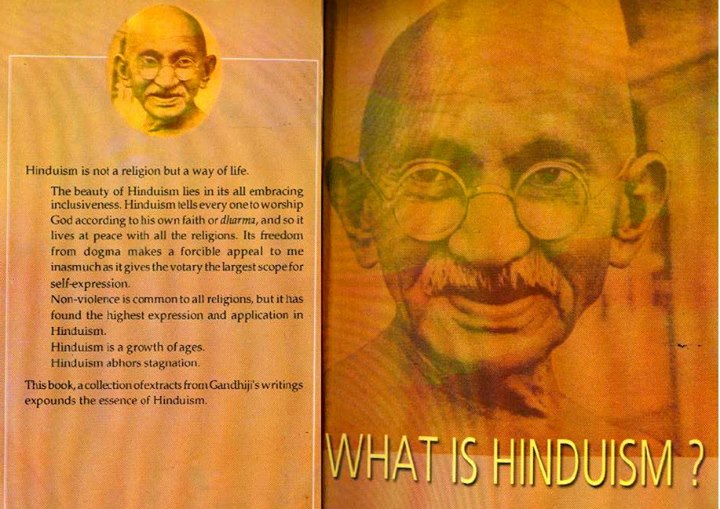 If were asked to define the Hindu creed, I should simply say:
Search after Truth through non-violent means. A man may not believe even in God and still call himself a Hindu. Hinduism is a relentless pursuit after Truth and if today it has become moribund, inactive, irresponsive to growth, it is because we are fatigued and as soon as the fatigue is over Hinduism will burst forth upon the world with a brilliance perhaps unknown before. Hinduism is the most tolerant of all religions. Its creed is all embracing.

English Word 'Religion' is misnomer. 'Dharma' means 'Rightousness' "reckoned" as leading a life that is right. A country with majority of a sect can not be irreligious or secular or non-religious. Church-Preachers, Mosque-Mullah, Custodian of Temples are not always 'righteous' - their object is to increase followers of own sect

'Hindu' is not a Religion - it refers to people living near Sindu by Zorostrian Persian during Cyrus rule, which extended to Indus River in 600BC- as Persian pronounced 'S' as 'H' They say 'Haftah' to 'Saptah'-Number Seven '7' Sapt is 'Haft'-, 8 is 'Hasht - Sindu is Hindu. 'Sanatan' means "the eternal Law - that exist for ever.

Did he really study it? I am doubtful. It takes complete devotion and ages to study it and understand it. He was primarily a politician lawyer autocrat child and a leader.

Unfortunately it has burst forth as hindutva in today india.

This fellow did not know ANYTHING about Hinduism. He was an expert on Puritan Christianity. His compatriots used to openly laugh at his ignorance and yet stubborn stupidities. Much was suppressed by the later day governments and historians.

Anyone who equates non-violence with Hinduism is a donkey. The Gita is a handbook for a soldier - "go out there and destroy", it says. All this Ahimsa nonsense came with Buddhism, not Hinduism.

Unfortuantely Gandhi's half-truth about non-violence made some spineless Hindus for which islamic violence is on rise in so called Hindu majority India.In no other country minorities can't be do such atrocities on the majority.Hindutva is needed not to save Hinduism but to save the Hindu community in India.You can keep your eyes closed in the name of 'secularism'(pseudo-secularism) but that won't change the truth.Wherever in India muslims will increase in no. they will teach the spineless Hindus a lesson as they did in Kashmir or in Malda,Murshidabad in West Bengal or anywhere else.

It is funny because he believed in Hindus, but many modern day Hindus (at least those who call themselves Hindus) stopped believing in him.

Most tolerant, does not mean non-violent. Anyway he's not an authority on Hinduism.

MKG himself a pervart, he's the main culprit for all the ills suffering by India.

Subhadeep Sir Can u Elaborate Buddhism an Offshoot of the Bigger Sanathan Dharma????????

yes, I too do not agree to that theory that Buddhism as known today is an offshoot of Hindusim as understood in Vedanta. Buddhism was a strange religion, a mix of this and that, and certainly what we know of Buddhism (the Mahayana thoughts) is 100% opposite of what Buddha himself taught (the Hinayana thoughts). And the Buddha, if we read his life, followed the same practices as the holy men of that time yet taught his followers to follow some very diluted moral science concepts. It is very confusing.

Even I hate Gandhi but many of his views about religion, peace,nonviolence.....r worth following in today's world, today the world really requires them.....

Non Voilence..... Thank u Gandhiji - It is wonder ful word "Muslim league" got new nation - Made my country partition - killed many people

All future generations of bharat r paying becz of misdeeds of Mr Gandhi....

Yeah, maybe he should have followed savarkar and pleaded with the Brits to stay.. We would have no country and no evils

as per the Mahabharath,pandavas were denied even five villages to rule ,not even a space for the needle to prick,war was the last resort.

So that, Russia banned geeta. For the cause of terrorism by it. Right?

Buddhism is a atheist way.

What the Russians do is their problem :-). Why should we be the slightest concerned !

Why not go to Pak you bustard?

A great and meaningful definition of Hinduism by Gandhi

This man was a shame for Hinduism...Shivaji manifested what true Hinduism is all about

Russia unbanned it mr. Subhanshu.And before even Buddha Hrishi Kapil preached atheism.Read Samkhya philosophy.Buddhism is mainly based on Samkhya & Yoga.And Buddhism is agnostic not atheist way.

Why not go to Nepal?there is no need of passport.visa. imigration.border is always open fr u.mention 1 reason why Nikhil varma shd go Pak?

The greatest man ever to walk the surface of the Earth,so said Einstien.

You are correct it is the book for soldier like Mahatma Gandhi. Adolf Hitler also read this.

Ha ha one should also read Charvaka philosophy :-). Hinduism is EVERYTHING - it has no limitations. That is why these other religions look so small and limited in scope, and that is why their followers are so violent, trapped in their own contradictions that they can free themselves only by violent reactions. That is why Ahimsa is also a very limited restricting concept.

Hinduism is only a handbook of life, Buddhism paves the way to immortality.