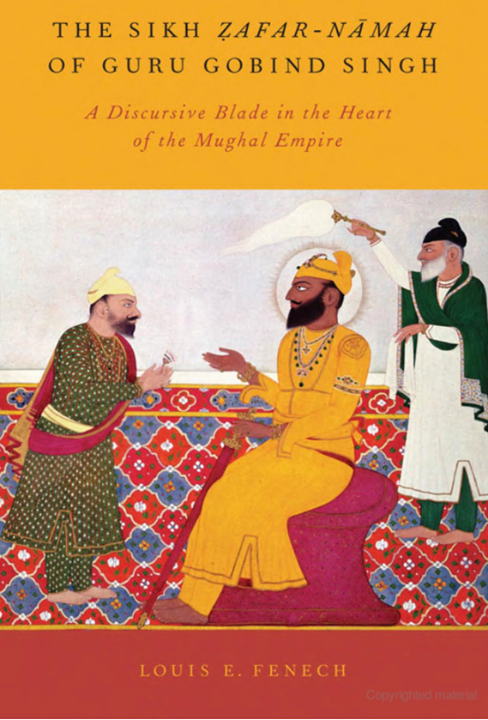 New Book:
The Sikh Zafar-namah of Guru Gobind Singh: A Discursive Blade in the Heart of the Mughal Empire
By Louis E. Fenech
Published by Oxford University Press - 2013

Louis E. Fenech offers a compelling new examination of one of the only Persian compositions attributed to the tenth Sikh Guru, Guru Gobind Singh (1666-1708): the Zafar-namah or 'Epistle of Victory.' Written as a masnavi, a Persian poem, this letter was originally sent to the Mughal emperor Aurangzeb (d. 1707) rebuking his most unbecoming conduct. Incredibly, Guru Gobind Singh's letter is included today within the Sikh canon, one of only a very small handful of Persian-language texts granted the status of Sikh scripture. As such, its contents are sung on special Sikh occasions. Perhaps equally surprising is the fact that the letter appears in the tenth Guru's book or the Dasam Granth in the standard Gurmukhi script (in which Punjabi is written) but retains its original Persian language, a vernacular few Sikhs know. Drawing out the letter's direct and subtle references to the Iranian national epic, the Shah-namah, and to Shaikh Sa'di's thirteenth-century Bustan, Fenech demonstrates how this letter served as a form of Indo-Islamic verbal warfare, ensuring the tenth Guru's moral and symbolic victory over the legendary and powerful Mughal empire. Through analysis of the Zafar-namah, Fenech resurrects an essential and intiguing component of the Sikh tradition: its Islamicate aspect.