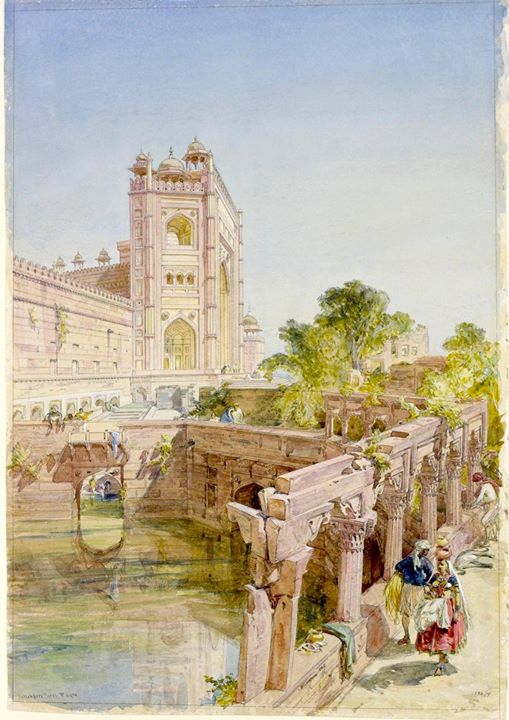 The Buland Darwaza (main gateway) of the Jami Masjid stands fifty-two metres high. The masjid, the principle building at Fatehpur Sikri was constructed by the Mughal emperor Akbar and completed between 1571 and 1572. Simpson's view is unusual in that he depicts the gateway from the side in order to include the pretty water-tank in the foreground.

William Simpson (1823 - 1899) was commissioned to go to India by his employers, Day and Sons, the London lithography firm. Having established his reputation by documenting the Crimean war in 1854, he was instructed to sketch well-known sites in and around Delhi associated with the heavy fighting of 1857.

Simpson arrived in Calcutta (Kolkata) in 1859 and travelled widely. His rapid pencil drawings formed the preparatory studies for his finished watercolours which were done after his return to London in 1862. His fond memories of India, as noted in his journal, resulted in these highly coloured, evocative and romantic interpretations of the Indian landscape.

I wonder what are these collonades and water body. Presently the landscape has changed, though one can see the hamam.

Saaem Raza why do us indians have such poor sense of history..? why do we neglect, negate and actively engage in destroying our own heritage.? (in ancient times, rocks and bricks from old monuments were stolen away to be used in local construction site in villages and towns)

I don't think you should knock yourselves for actively destroying your heritage in the way you describe. I think, in ancient times, the reuse of building materials happened in every land. For instance, archaeologists in the UK, when 'digging' old sites, often find that early buildings have been 'robbed-out' to reconstruct new. I do think that maybe in India you are a bit guilty in modern times in several ways - not the least is the "restoration" methods used by some authorities, where attempts to reproduce what once was, result in loss of integrity. Far better to restore what remains. I think you have a wonderful sense of history - but educationists get bogged down by more modern history (sometimes rewriting it!), instead of teaching about the ancient.

Ma'am you are right.. but the thing is that we have very poor sense nonetheless.. Ours is a 8000-10000 year old civilization.. thousand year old artifacts and ruins can be found almost everywhere and even in homes of people easily.. People dig up their farms for farming and find pots full of gold, rivers dry in summers and 2000 year old statues are laid bare just to be picked up and put in museum. Inspite of all this, our collective knowledge about our histroy is very dim, archeological departments are bankrupt and have lack of all kind of resources.. even the folktales are now losing steam in common public and the little public understanding we used to have about our past is fading away ... And all of this is a big reason why we never learn from our mistakes of past