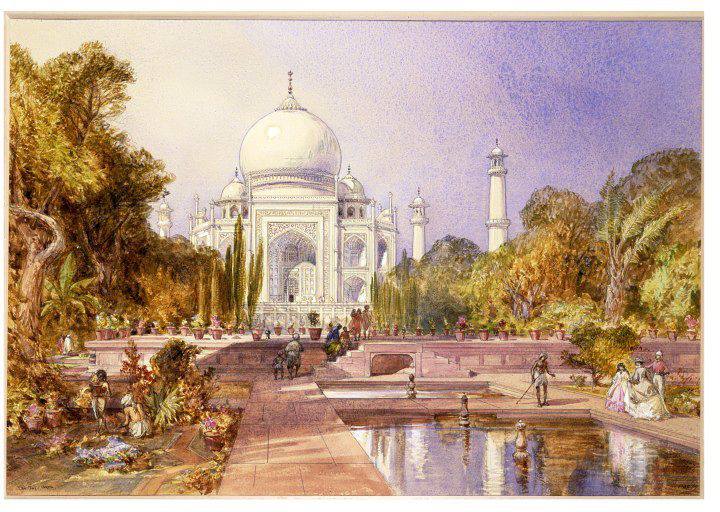 Painting of the Taj Mahal from the Garden, Agra by William Simpson, waterolour on paper, India, 1864.

This picture shows the Taj Mahal, built in Agra in northern India between 1631 and 1648 by the Mughal emperor Shah Jahan as a tomb for his beloved wife, Mumtaz Mahal. The monument is seen from the garden, with Europeans and malis (gardeners) in the foreground and flowerpots much in evidence.

William Simpson was born in Glasgow in 1823. At the age of 14 he joined a printing firm, where he learned the art of lithography and was subsequently employed to make a visual record of the Crimean War. In 1859, the publishing firm of William Day and Son commissioned Simpson to visit India and make drawings for a book illustrating well-known places associated with the 1857 uprising of the Indian army against their British officers.

Thus began Simpson’s long connection with India and the first of four visits over the next 25 years. He saw Upper India, the Himalayas, central, southern and western India, and he took an interest in a great range of subjects, making numerous rapid pencil drawings in sketchbooks, often heightened with colour washes. Many formed preparatory studies for his finished watercolours, most of which he worked up after returning to London. But unfortunately, during his absence, Day and Son had experienced financial problems and in 1867 they went into liquidation. Two years later, 250 of his watercolours were sold as bankrupt stock – ‘the big disaster of my life’, as he put it.

a good thing that the British didn't disassemble it and take it back to England, as they planned

Are you sure there was such a plan ? Ironically the imperialist, Lord Curzon, was the one who did the most to preserve the Taj in the state we find it.