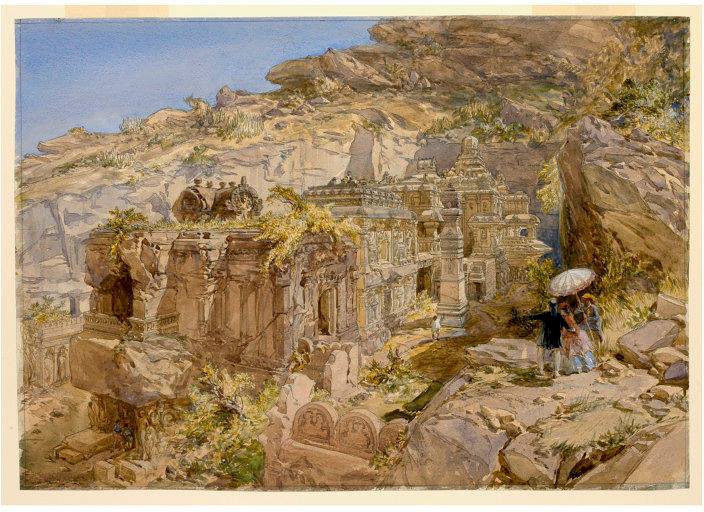 Painting of the Kailasanatha temple, Ellora By William Simpson, watercolour on paper, India, 1862

Overview of the great rock-cut Kailasanatha temple at Ellora. Taken from the top of the temple, this image gives a sense of the immense scale of the architecture. There is a European couple on the right hand side looking across at the temple.

William Simpson was commissioned to go to India by his employers, Day and Sons, the London lithography firm. Having established his reputation by documenting the Crimean war in 1854, he was instructed to sketch well-known sites in and around Delhi associated with the heavy fighting of 1857.

Simpson arrived in Calcutta (Kolkata) in 1859 and travelled widely. His rapid pencil drawings formed the preparatory studies for his finished watercolours which were done after his return to London in 1862. His fond memories of India, as noted in his journal, resulted in these highly coloured, evocative and romantic interpretations of the Indian landscape.

Simpson, a largely self-taught artist from a poor family in Scotland, had hoped to achieve fame on the publication of his paintings in a lavishly illustrated volume. Unfortunately, financial problems led to the poorly printed India Ancient and Modern containing only fifty images. Simpson called it the ‘big disaster’ of his life.

The V&A has the single most important collection of watercolours made during Simpson's first expedition to India.

If it had not been for British.. much of Indian civilizational contributions would have been lost

No words can be sufficient to praise this work .

True, it took foreigners to discover Hindu heritage , much of our sub continents history , bind us as indians, give us boundary / borders , formation of country ....only things INDIANS did was ......

You are right about most part, except for the part where you say that they us our identity as Indians.. that's not true