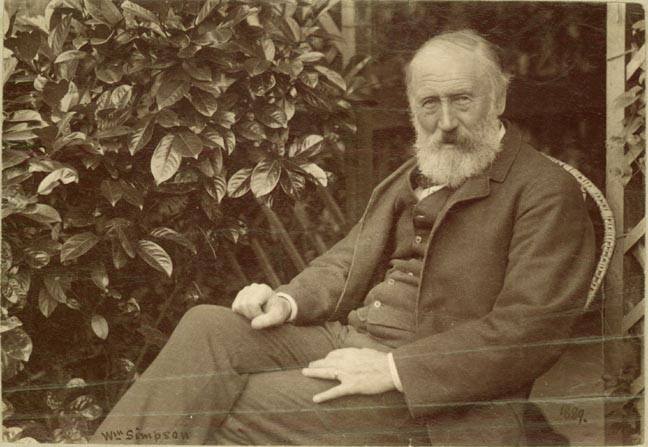 William Simpson is widely-known known today as the war artist whose first-hand depiction of the Crimean War helped bring home the reality of that ill-managed campaign to the British public. His were the surrogate eyes of Empire in many Victorian military adventures, and he reported faithfully and, indeed, sometimes disapprovingly, on what he saw: "wherever shot and shell and ugly sword-blades are about, there he is sure to be", wrote the Glasgow Baillie of him in 1878, for Simpson was the first of the Victorian "Special Artists" whose primary focus was war, a group which has now yielded place to war correspondents and cameramen.

But Simpson's achievements away from the world's battlefields were equally, if not more, memorable. He went to India several times, and, as so often happens with that deceptive subcontinent, he became enamoured of its cultures and its contrasts. The Great Mutiny of 1857 had brought India considerable attention in Britain, and Day & Sons concluded that the production of a large format book of tinted lithographs by Simpson of Indian scenes would be a profitable undertaking. A sign of the esteem in which Queen Victoria held Simpson as a result of his Crimean sketches was her permission to dedicate the forthcoming book to her, sight unseen. This, Simpson's first visit to India, lasted almost three years, from 1859 to 1862, and he sketched prolifically the architecture, archaeology, and daily life of the people, from the southern plains to Nepal and Tibet. Unfortunately, during his absence from Britain Day & Sons failed, and Simpson's watercolours of India eventually became part of their liquidated stock. A small book, India, Ancient and Modern, was later produced, but was of poor quality. Unfortunately Simpson had funded his own travels and he was left almost destitute on his return to London.

Nevertheless, Simpson's writings on a range of learned topics about the sub-continent earned him a reputation as an Indian expert. He wrote a paper entitled "Architecture in the Himalayas" for the Royal Institute of British Architects; a trip to the holy source of the Ganges, the "Cows Mouth", was described in a paper presented to the Alpine Club; a piece entitled "Pujahs in the Sutlej Valley, Himalayas" appeared in the Journal of the Royal Asiatic Society; and a treatise on Indian jewellery appeared in The Watchmaker, Jeweller and Silversmith. His interest in Eastern mysticism was also thoroughly nurtured, resulting years later in a book, The Buddhist Praying Wheel.

Gomukh,-Origin of Bhagirathi River and Terminus of Gangotri-Glacier in Himalayas 1860'