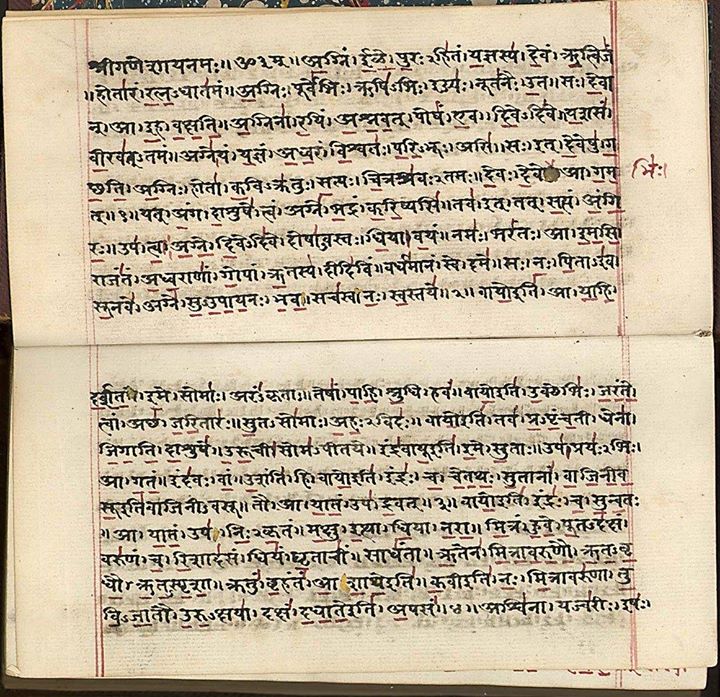 Digital Rare Book:
The Taittiriya Aranyaka of the Black Yajur Veda, with the Commentary of Sayanacharya
Edited by Rajendralala Mitra
Printed at The Baptist Mission Press, Calcutta - 1872

The Aranyakas are the Philosophy behind ritual sacrifice part of the ancient Indian texts, the Vedas. They typically represent the earlier sections of Vedas, and are one of many layers of the Vedic texts. The other parts of Vedas are the Samhitas (benedictions, hymns), Brahmanas (commentary), and the Upanishads (spirituality and abstract philosophy).

Aranyakas describe and discuss rituals from various perspectives, but some include philosophical speculations. For example, Katha Aranyaka describes rituals such as the Mahavrata and Pravargya. Aitareya Aranyaka includes explanation of the Mahavrata ritual from ritualisitic to symbolic meta-ritualistic points of view. Aranyakas, however, neither are homogeneous in content nor in structure. Aranyakas are sometimes identified as karma-kanda (कर्म खण्ड, ritualistic action/sacrifice section), while the Upanishads are identified as jnana-kanda (ज्ञान खण्ड, knowledge/spirituality section). In an alternate classification, the early part of Vedas are called Samhitas and the commentary are called the Brahmanas which together are identified as the ceremonial karma-kanda, while Aranyakas and Upanishads are referred to as the jnana-kanda.

In the immense volume of ancient Indian Vedic literature, there is no absolute universally true distinction between Aranyakas and Brahamanas. Similarly, there is no absolute distinction between Aranyakas and Upanishads, as some Upanishads are incorporated inside a few Aranyakas. Aranyakas, along with Brahmanas, represent the emerging transitions in early Vedic religious practices.The transition completes with the blossoming of ancient Indian philosophy from external sacrificial rituals to internalized philosophical treatise of Upanishads.