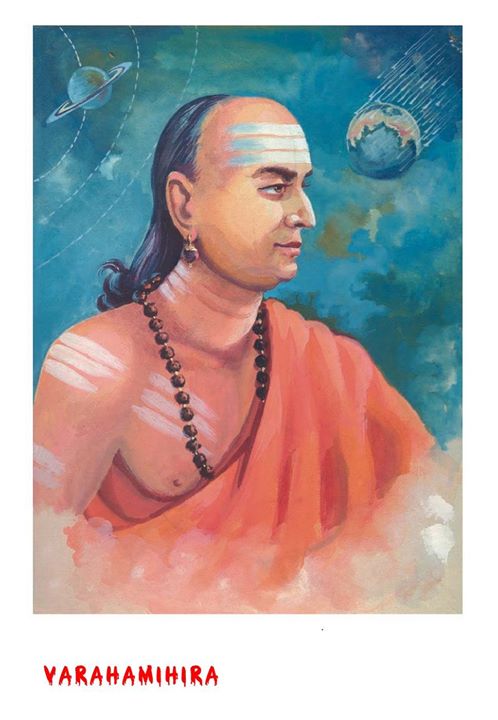 His encyclopaedic knowledge and his lively presentation of subjects, as dry as astronomy, made him a celebrated figure.

Even thousands of years before, India had become famous and reached its pinnacle in astrological and astronomical sciences. Ancient Astrological works had been translated into many foreign languages. Ibn Batuta and Al Baruni were two prominent Arab travellers who had visited ancient India specially to pursue Astrology. By their translations they had induced German scholars to come to India to study Astrology and Vedic literature. Varahamihira was one of the only renowned Indian Astronomer, Mathematician and Astrologer whose name became a household word throughout India and it is said his near contemporaries Aryabhata and Brahmagupta even did not match with the popularity of Varahamihira.

Varahamihira was born in 499 A.D. into a family of Brahmins settled at Kapittha, a village near Ujjain. His father, Adityadasa was a worshipper of the Sun god and it was he who taught Varahamihira astrology. On a visit to Kusumapura (Patna) young Varahamihira met the great astronomer and mathematician, Aryabhata. The meeting inspired him so much the he decided to take up astrology and astronomy as a lifetime pursuit. At that time, Ujjain was the centre of learning, where many schools of arts, science and culture were flourishing in the prosperity of the Gupta reign. Varahamihira, therefore, shifted to this city, where scholars from distant lands were gathering. In due course, his astrological skills came to the notice of Vikramaditya Chandragupta ii, who made him one of the Nine Gems of his court.

It is interesting to note as to how Varaha-mihira got the title ‘Varaha’. King Vikramaditya was aghast at the royal astrologer Mihira’s prediction. He looked round the well-lit and crowded court and asked in anguish “Can it be true?” There was no reply. There was pin-drop silence as all were shocked beyond words at the royal astrologer’s prediction. Breaking the silence and with full of grief himself, the royal astrologer confirmed the prediction, “The position of the planets predicts the death of the prince at the age of18.” Though the King controlled his emotions, the Queen could not contain herself and wailed “My lord, you should see to it that this prediction proves false.”

Though the King had full faith in his astrologer Mihira, he took every precaution to protect and save his son. But on the predicted day, a boar killed the prince. When the news reached the King, he summoned Mihira to his court and told him “I am defeated, you have won, you have won.” The astrologer was as sad as the king, and he replied “My Lord. I have not won. It is the science of astronomy and astrology that has won!” “Whatever it may be, my respected astrologer,” said the King. “It has convinced me that your science is nothing but truth. And for your mastery of the subject, I now confer upon you the Magadha kingdom’s greatest award, the emblem of the varaha (boar).” So from that time Mihira came to be known as Varahamihira.

Similar to chemistry's relationship with alchemy, at times, the ancients also attempted to understand astronomy through astrology.