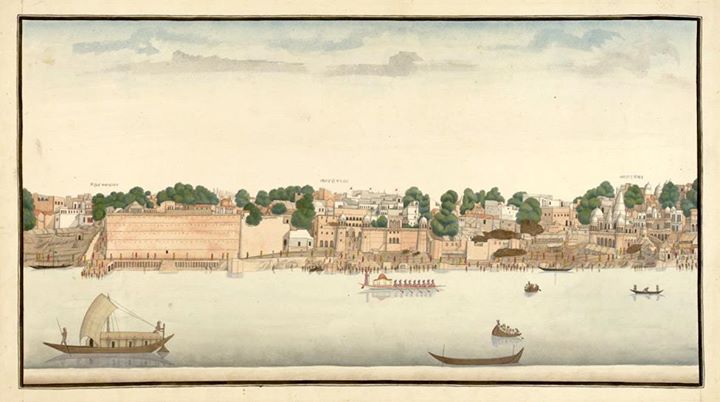 A view of the river bank at Benares, including the Mir Ghat, Lalita Ghat, and Jalsain Ghat - 1790

Watercolour showing a view of the river bank at Varanasi (Benares) in Uttar Pradesh, including the Mir Ghat, Lalita Ghat, and Jalsain Ghat by an anonymous artist working in the Murshidabad style, c.1790. Inscribed in nagari above the relevant portions of the drawing is: 'rosatamali ki ghat; lalatadopi (lalitadevi?) ka ghat; jalsai ki ghat'.

Varanasi is situated on the holy River Ganges and was founded in the 6th century BC. It is one of the seven sacred cities of Hinduism. The river was said to have descended from heaven to earth and is regarded by Hindus as the elixir of life; those who touch the water are said to be absolved of sin. The waterfront of the city is lined with over 100 ghats, long flights of stone steps where residents and pilgrims come to perform their ablutions and worship in the temples. This painting is one of a set of four that show various sequences of the ghats along the river bank at Varanasi.

Text and image credit: Copyright © The British Library Board

Sarojini Singh Check this out. This is so nice.