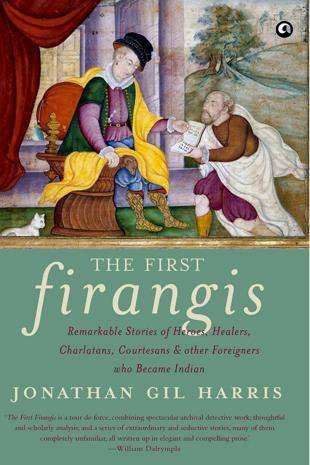 A history of the foreigner that concludes all Indians are ultimately ‘firangis’—and turns being Indian into a malleable concept.

The mystery of the authentic Indian

Much has been written about the British who came to India during the high noon of the Raj. As I know from my childhood in Kolkata, they were usually strongly discouraged from becoming Indian—going native or becoming jungly, as it used to be said. Those who came to India during the early years of the Raj have become well known as “white Mughals” as a result of William Dalrymple’s highly acclaimed book. They did indeed become Indian, and embraced Indian culture.

In his new book The First Firangis, Jonathan Gil Harris tells the stories of foreigners, or firangis, who came to India before the British exercised any authority. Often fleeing poverty or persecution, they had to accommodate themselves to the climate, culture, cuisine and language of the part of India they found themselves in. They lived under Indian, not colonial, rule.

Harris tells fascinating stories of extraordinary men and women, and their lives lead him to consider what becoming Indian means. One of the most fascinating firangis is an Englishman called Thomas Coryate, who became a fakir, a travelling mendicant. Coryate had served in the court of King James I as a sort of jester, renowned for never-ending oration in which he dodged from language to language.

Odd Tom, as he became known, in part because he was very small and had a peculiarly ugly face, was a great traveller. He wrote an account of a European tour called Crudities, which gave him a taste for being a celebrity. Odd Tom’s travels eventually took him to India. Dressed as a fakir in Ajmer, he managed to deliver an oration in the manner of a fakir to Mughal emperor Jahangir. Eventually, starving and burning with fever, Odd Tom died in Surat after a night carousing with young officers of the East India Company.

Italian writer and traveller Niccolò Manucci ran away from Venice and appears to have become the servant of an English lord who, like Odd Tom, wanted to meet the Mughal emperor, this time Shah Jahan, but died travelling from Agra to Delhi. Manucci was left stranded. The Italian was robbed by two villainous English firangis who were part-time mercenaries in the pay of the emperor and part-time dakaits (bandits). He then spent the next 30 years drifting about India.

Eventually, Manucci went to see an old friend in Pondicherry (now Puducherry) and told him he had had enough of India. But the friend persuaded him that he was now so Indian he would find it very difficult to settle down in Europe, so he stayed on in south India, practising as a Siddha vaidya, or traditional physician.

Never Knew this one!!

Florence the capital city of the Tuscany region, its Italian name is :-"Firenze" -- (Firengea in Persian)

Nothing to do with Florence - the word dates from the crusades when the leading instigators were the French (from the christian side). Firangi (Arabic Firanje also) derives from Frank (France) - the realm that was at the helm of the invading crusaders. Prominent Lebanese politicians named Franjieh - word used all over SE Asia to denote a Westerner, too.

Also the word was in circulation in the Arab and Byzantine world much before Marco Polo.

Thank you for the share. White Mughals was a revelation. I love the definition of an Indian, so malleable. As a British-born member of the Indian diaspora, this malleability is very interesting.