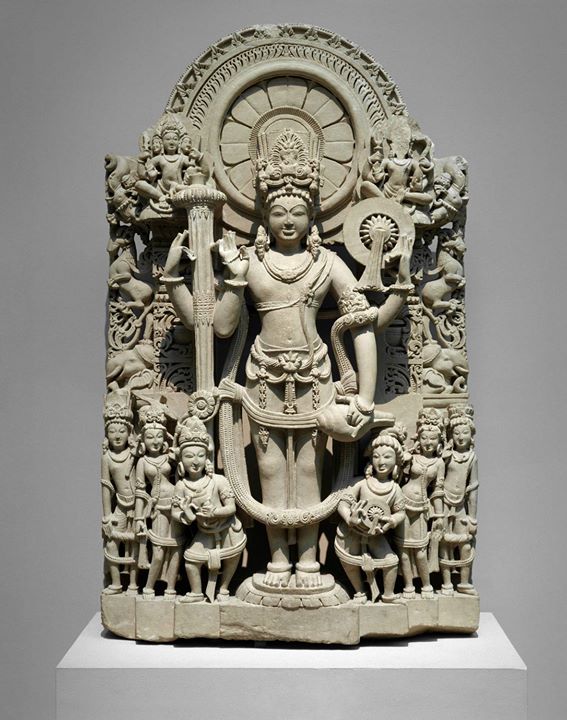 "Originally appeared in Bengali in the 'Prabasi' (Pous and Magh 1320) and has now been translated by Mr. Sukumar Ray and is reprinted from The Modern Review."

This elaborate stela of the god Vishnu shows him at the center holding his usual attributes (clockwise from upper right): a chakra (war discus), a conch-shell trumpet, and a gada (mace). His raised hand is held in abhayamudra, or the fear-allaying gesture. He wears a tall miter and a long garland of flowers. His head is surrounded by an ornate nimbus with bands of lotus petals, flames, and abstracted triangular floral motifs. Flanking his legs are six figures: the personifications of his discus and conch trumpet (who also hold these attributes), his two wives, and two additional attendants. On each side above them are two vertical panels. The innermost contains foliate scrolling and a pot from which plant life emanates. The left panel is topped by a figure of Brahma seated on a lotus and the right by Shiva in a similar attitude. Brahma can be identified by his four heads (three of which are shown) and Shiva by the trident and chakra he holds. The outermost panels show the typical pile-up of elephants surmounted by composite lion-goats (vyalis) and elephant-crocodiles (makaras).

Text and Image credit: The Metropolitan Museum of Art

Exquisite , Brahma Vishnu and Mahesh in a single piece

Such a rare and beautiful sculpture. Thank for posting this.

Out of this world!..What a pity the sculptor(s) are kept ananymous!!!.Treason by the rulers against artists and their art..!!!