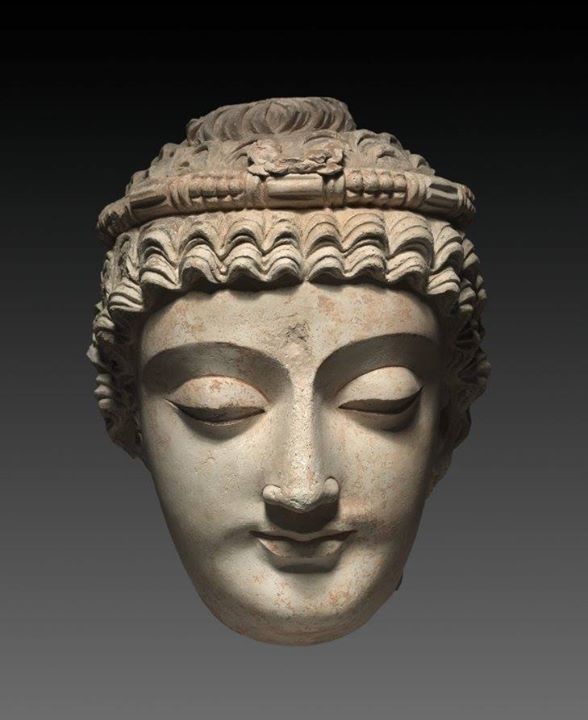 By this period, individual bodhisattvas were beginning to be revered as ideal figures who would deliberately postpone their own enlightenment and entrance into final nirvana, which is a state from which no one returns to be reborn into this world. Bodhisattvas accomplish all but the final meditation leading to full enlightenment, but they are considered to be so advanced in their practice and realization that they have the ability to control their rebirth and act in righteous and compassionate ways to help others achieve enlightenment.

Because the remains of a lotus pedestal on which a Buddha sat is at the center of the diadem, this head can be identified as that of the Bodhisattva of Compassion. The idealized linearity of the brows and eyes along with the formalized waves of hair give an ethereal quality to the otherwise naturalistic face.

Just think before Muslim invaders came to India, the country had beautiful art all over.

marking the time, thanks.

this head can be identified as that of the Bodhisattva of Compassion....." pls tell me how you can be recognizing the Boddhisattva of compassion... tks

"...Thus Avalokiteshvara (the Bodhisattva of Infinite Compassion) carries a lotus and has a small Buddha image adorning his crown, and the Bodhisattva Maitreya (the Buddha of the Future) carries a water vessel and has a stupa in his crown. Goddesses, too, were introduced into this later Buddhism, and Tara, who holds a lotus, is one of the most deeply venerated." Read more: http://bit.ly/22k5Xa3

Ah you look very sure of what you write but the images and their attributes vary from country to country, and as many buddhist countries as many differences.....Sorry but i have some doubts about the explanations...There are nuances here and there that I donot find here.

I am afraid...I have only provided links of expert opinions. We need to learn from many sources to arrive at an understanding.