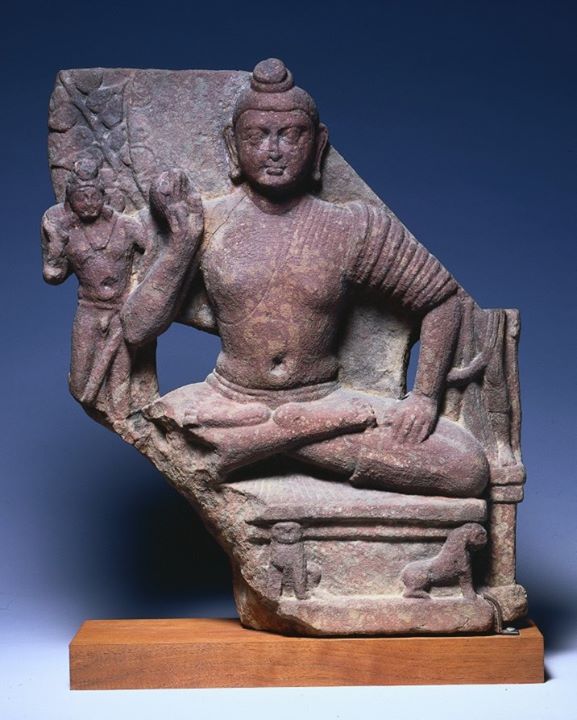 This Buddha is placed on a lion pedestal, part of which is broken off. The pedestal was undoubtedly flanked on both sides by seated lions in profile; its center is decorated with the same animal shown frontally.

Sakyamuni is seated, cross-legged, with the right hand expressing the abhaya mudra and the left resting on his thigh. His body is clad in a transparent garment. The massive round head displays fleshy Kushana features, while the hair is indicated only by the hairline and the kaparda (coil of hair) on the top of the head. The figure was flanked by the pair of attendants Brahma and Indra, but only Brahma with the chauri (on the Buddha's proper right) remains, Indra having been broken off with the upper part of the stele. Enough of the stele remains to determine that a scalloped halo encircled Buddha's head and that around it was the bodhi tree, which is also articulated along the back of the stele.
The sculpture was conceived almost like a sculpture in the round, even if the impression is more that of two reliefs put together. The reverse side shows the entire bodhi tree with tree trunk, branches, and foliage, and adds such captivating accents as a squirrel on one of the branches. It also shows the back of the throne, the Buddha, and his attendants. The stele is perforated to enforce the effect of a sculpture in the round.