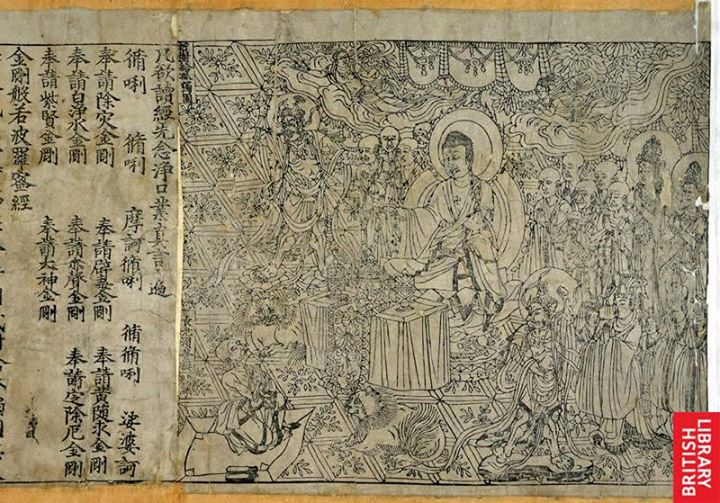 How did the Diamond Sutra get its name?
The sutra answers that question for itself. Towards the end of the sermon, Subhuti asks the Buddha how the sutra should be known. He is told to call it 'The Diamond of Transcendent Wisdom' because its teaching will cut like a diamond blade through worldly illusion to illuminate what is real and everlasting.

The original Sanskrit title is 'Vajracchedika-prajnaparamita-sutra'. Around 400 AD, the sutra was translated into Chinese, by an Indian scholar-monk called Kumarajiva, who named it 'Jin gang ban ruo luo mi jing'.

Jewel imagery features strongly in Buddhism. At the centre of the faith are the three jewels, or triple-jewel: the Buddha, his teaching (the 'Dharma'), and the spiritual community (the 'Sangha'). A popular Buddhist parable tells the story of a poor man who travels through life unaware of the precious jewel that has been sewn into the hem of his coat by a well-meaning friend.

What's it about?
The teachings of Buddhism are subtle and open to more than one interpretation. The 'Diamond Sutra' urges devotees to cut through the illusions of reality that surround them. Names and concepts given to both concrete and abstract things are merely mental constructs that mask the true, timeless reality lying behind them.

The relatively short 'Diamond Sutra' was popular because it could be memorised more easily than longer sutras and chanted in some 40 minutes. This was important because Buddhism teaches that recitation of sutras 'gains merit', that is, helps towards achieving a higher incarnation.

In the 'Diamond Sutra', the Buddha says: "if a good son or good daughter dedicates lifetimes as many as the sands in the River Ganges to charitable acts, and there were another person who memorised as much as one four-line verse of this scripture and taught it to others, the merit of the latter would be by far greater."

Text credit: © The British Library Board