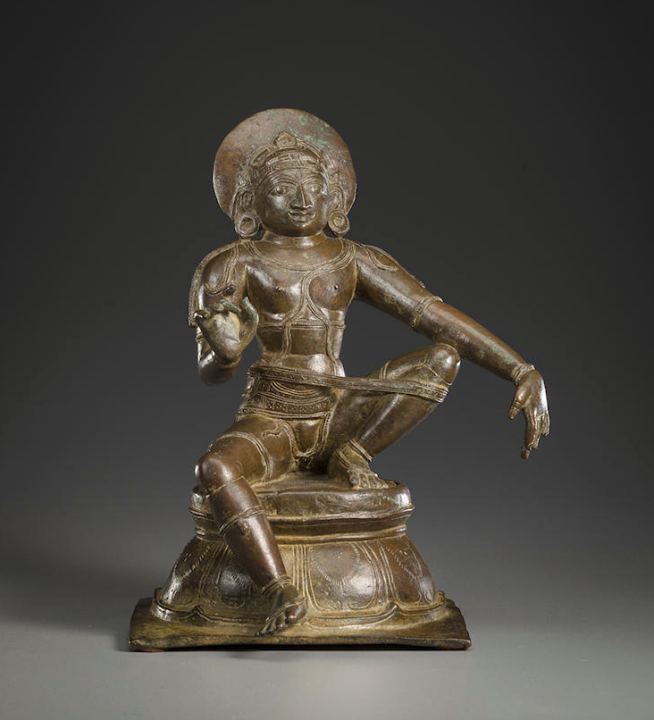 Ayyanar (also spelt Aiyyanar, Ayanar or Iyenar) is a Hindu village god of Tamil Nadu also worshipped by Sri Lankan Tamils. He is primarily worshipped as a guardian deity who protects the rural villages. Most officiating priests are derive from local potter community, but other caste members also officiate in his temples.The temples of Aiyanar are usually flanked by gigantic and colorful statues of him and his companions riding horses or elephants. There are number of theories as to the origins of the deity as well as the etymology of the name. He is associated with the god Ayyanayake by the Sinhalese people of Sri Lanka.

An Aiyanar is usually represented either as a warrior on foot; or riding a white horse or elephant. He is also represented as seated between his two wives, carrying a sceptre or whip and wearing a meditation band, a cloth girdle circling the back and supporting the knees of a seated person, from the Sanskrit Yogapaţţa or Tamil Vāgupaţţai.

Aiyanar is often represented with an escort, usually composed of the god's vassals, sometimes comprising demons. Consistent with this practice, terracotta horses are usually placed outside the temple. These are given up to the god as steeds for his night time perambulations. (Wikipedia)

Seated in rajalilasa on a broad-leafed lotus pedestal, his left arm resting on his left leg supported by a yogic band wrapped around his waist, his right hand raised in vitarka mudra, his substantial torso adorned with sacred threads, his face, with a long pointed nose and opened irises and third eye, crowned and backed by a nimbus.

Venerated as a guardian deity of rural villages. His priests are usually non-Brahmins, who mostly belong to the potter caste.

Amazing! Does anyone know where this statue is now ?

A private collection in all probability as this was sold in a Bonhams auction.

This is the first time I've seen Ayyanar in metal form. Do you know of any temples where other metal casts of Ayyanar can be found ?

There is a temple dedicated to this God in Perangalur on Tanjavur Pudukottai road.