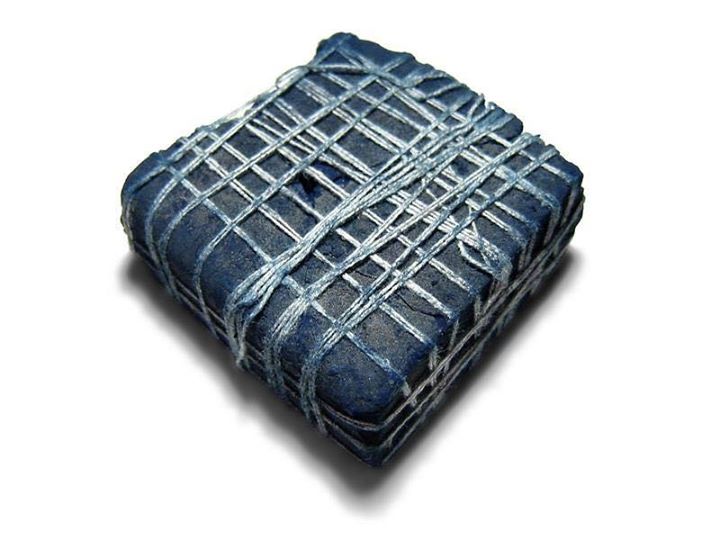 I find it funny those questioning the name of India , when one of the most ancient dyes is named after the "Indian Dye" that is Indigo or Neel in Sanskrit .

Before the Arabs called us Hind , the Greeks and Romans had been trading textiles and called us India .

Till almost 1880's there was no synthetic alternative to Indigo dye , till the Germans found one .

Synthetic dyeing is just about a 100 year old history . The whole world wore textiles only out of natural dyes till late 19th century .

Indigo is among the oldest dyes to be used for textile dyeing and printing. Many Asian countries, such as India, China, Japan, and Southeast Asian nations have used indigo as a dye (particularly silk dye) for centuries. The dye was also known to ancient civilizations in Mesopotamia, Egypt, Britain, Mesoamerica, Peru, Iran, and Africa.

India is believed to be the oldest center of indigo dyeing in the Old World. It was a primary supplier of indigo to Europe as early as the Greco-Roman era. The association of India with indigo is reflected in the Greek word for the dye, indikón (ινδικόν, Indian).

The color indigo was named after the indigo dye derived from the plant Indigofera tinctoria and related species.

The I. tinctoria species was domesticated in India. Indigo, used as a dye, made its way to the Greeks and the Romans, where it was valued as a luxury product.

Species of Indigofera were cultivated in India, East Asia and Egypt in antiquity. Pliny mentions India as the source of the dye, imported in small quantities via the Silk Road.

The Greek term for the dye was Ἰνδικὸν φάρμακον ("Indian dye"), which, adopted to Latin as indicum and via Portuguese gave rise to the modern word indigo.

The first known recorded use of indigo as a color name in English was in 1289.

Indigofera tinctoria, also called true indigo, is a species of plant from the bean family that was one of the original sources of indigo dye.

It has been naturalized to tropical and temperate Asia, as well as parts of Africa, but its native habitat is unknown since it has been in cultivation worldwide for many centuries.

Today most dye is synthetic, but natural dye from I. tinctoria is still available, marketed as natural coloring where it is known as neel in India , tarum in Indonesia and nila in Malaysia. In Iran and areas of former USSR known as basma. The plant is also widely grown as a soil-improving groundcover.

True indigo is a shrub one to two meters high. It may be an annual, biennial, or perennial, depending on the climate in which it is grown. It has light green pinnate leaves and sheafs of pink or violet flowers. The plant is a legume, so it is rotated into fields to improve the soil in the same way that other legume crops such as alfalfa and beans are.

Dye is obtained from the processing of the plant's leaves. They are soaked in water and fermented in order to convert the glycoside indican naturally present in the plant to the blue dye indigotin. The precipitate from the fermented leaf solution is mixed with a strong base such as lye.

Indigo remained a rare commodity in Europe throughout the Middle Ages. A chemically identical dye derived from the woad plant (Isatis tinctoria), was used instead. In the late 15th century, the Portuguese explorer Vasco da Gama discovered a sea route to India. This led to the establishment of direct trade with India, the Spice Islands, China, and Japan. Importers could now avoid the heavy duties imposed by Persian, Levantine, and Greek middlemen and the lengthy and dangerous land routes which had previously been used. Consequently, the importation and use of indigo in Europe rose significantly. Much European indigo from Asia arrived through ports in Portugal, the Netherlands, and England. Spain imported the dye from its colonies in South America. Many indigo plantations were established by European powers in tropical climates; it was a major crop in Jamaica and South Carolina, with much or all of the labor performed by enslaved Africans and African Americans. Indigo plantations also thrived in the Virgin Islands. However, France and Germany outlawed imported indigo in the 16th century to protect the local woad dye industry.

Indigo was the foundation of centuries-old textile traditions throughout West Africa. From the Tuareg nomads of the Sahara to Cameroon, clothes dyed with indigo signified wealth. Women dyed the cloth in most areas, with the Yoruba of Nigeria and the Mandinka of Mali particularly well known for their expertise. Among the Hausa male dyers, working at communal dye pits was the basis of the wealth of the ancient city of Kano, and they can still be seen plying their trade today at the same pits.

In Japan, indigo became especially important in the Edo period, when it was forbidden to use silk, so the Japanese began to import and plant cotton. It was difficult to dye the cotton fiber except with indigo. Even today indigo is very much appreciated as a color for the summer Kimono Yukata, as this traditional clothing recalls Nature and the blue sea.

Newton used "indigo" to describe one of the two new primary colors he added to the five he had originally named, in his revised account of the rainbow in Lectiones Opticae of 1675.

In 1897, 19,000 tons of indigo were produced from plant sources. Largely due to advances in organic chemistry, production by natural sources dropped to 1,000 tons by 1914 and continued to contract. These advances can be traced to 1865 when the German chemist Adolf von Baeyer began working on the synthesis of indigo. He described his first synthesis of indigo in 1878 (from isatin) and a second synthesis in 1880 (from 2-nitrobenzaldehyde). (It was not until 1883 that Baeyer finally determined the structure of indigo.

Replaced Middle English ynde (late 13c., from Old French inde "indigo; blue, violet" (13c.), from Latin indicum). Earlier name in Mediterranean languages was annil, anil (see aniline). As "the color of indigo" from 1620s. As the name of the violet-blue color of the spectrum, 1704 (Newton).

Nil Darpan a drama by Dina Bandhu Mitra, translated by Rev.James Long was staged in Theatre Royal by Girish Ghosh in 1872.

Indigo-factory-(Loading-the-Vats)Indigo planting in Bengal started around 1777. Indigo planting became more and more commercially profitable due to the demand for blue dye in Europe. It was introduced in large parts of eastern India. The indigo planters mercilessly pursued the peasants to plant indigo instead of food crops. They provided loans, called dadon at a very high interest. Once a farmer took such loans he remained in debt for whole of his life before passing it to his successors. The price paid by the planters was meagre,only 2.5% of the market price. The farmers could make no profit growing indigo. The farmers were totally unprotected from the brutal indigo planters, who resorted to mortgages or destruction of their property if they were unwilling to obey them. Government rules favoured the planters. By an act in 1833, the planters were granted a free hand in oppression. Even the zamindars, money lenders and other influential persons sided with the planters. Out of the severe oppression unleashed on them the farmers resorted to revolt Photo 1872

Cutting Indigo plant in the field and Loading Carts

BASF, commonly referred as 'The' Chemical company found its fortune when it invented a process to produce synthetic dyes including Indigo. After 150 years of being business, it recently sold its textile division.

Hahahahhahahaha ha these chaddis can say or do anything to feed their nonsense. If he knows that much about "India" can he also explain where was the capital of that India ? Who was the king of that India ? What kind currency then used ?

The essay starts with a fractured logic in the first para and then goes on to an ipse dixit in the second.

When the eorld is waking upto pollution,.it is time to ban all synthetic dyes,only natural dyes should be permitted. Let us pay more for natural products now than to pay for generations with ill health. Leather is another industry polluting the world,should be done away with. We have to learn to live with less. My generation did not know of the magnitude of consequences of excess consumption. This seems not to be coming down ,may be it has to be taught from young age now.

My great grandfather was an Indigo trader. He lost his livelihood when synthetic dyes were introduced in late nineteenth century in India.

There are books too from British era in India.

The article and as well as the comments tickled my brain! :)

Sorry, I am missing the central ideation and logical order of the very essay; both objectively and subjectively. :/

indigo has a large and brutal economic role in Bengal in the 19th Century.

Indigo use in clothes color in my village Akola Chittor district Rajasthan since a long time....

That was most interesting. I love indigo fabrics!

Yeah right, why don't u tell us the answers to ur questions and establish ur intellectual supremacy! (y)

Whatever happened to Sindhu which became Hindu and then Indus, to then become the India?

Dear author, I think in your essay you wanted to share the etymology of the word India but you explained about Indigo. You should refer a good dictionary and other books to know the meaning of India. - Jane water house edition 1890 says Indian means "who lives in jungle" ... like a tribe named red-Indians in America. - In Arabic Hindu means black. Renowned poet Zauk (poetry master of Bahadur Shah Zafar) mentions in his one of the couplets; ख़त बढ़े, ज़ुल्फ़ें बढ़ीं, काकुल बढ़े, गेसू बढ़े हुस्न की सरकार में जितने बढ़े हिन्दू बढ़े Moles on face, hairline, temporal hair & hair in braid have increased, In the state of beauty only blacks have increased. - Bhaarat simply means the residents of Bharat-Varsa. You can look for meaning of it in any good sanskrit dictionary. Bhaarat means land of Bharat and Varsa means a division of earth separated by certain mountain range.

From Where did word India come? It Came from Sind and Sindhu. Persians could not pronounce 'S' it became 'H' and Greeks made it 'I'.

@piyush nagar there was no India before 1947.

People here comment that the article is about the dye indigo and not "India". I remember India is a more ancient name than we think, it is before English came. Will share info soon. People may Google too.

Absolutely agree with you... Author had wrong info "Greeks and Italians were calling us Indee and not India at all". I studied in Italian my teacher never called me India she always called me Indee boy. Author must study about our nation's name...

During Textile trading Greeks and Romans never ever called us India. Wrong information Mr Author. Even if you goto through Italian and Greek literature then you will realize we're always Eendee for them and not India.

Thanks for putting truth here coz i too knew this but ur comment is the first that i have gone through.

Change of name cannot change the ideology of the country

This is a subcontinent and was never one single nation. There were many small kingdoms with their seperate flags and currencies. The argument that because they were all followers of a single religion they therefore were one nation is like saying all muslim nations are one nation. They never were and never will be. Agey aur koi bakwas ho to batao.

20% of Indians are Pakistanis and they will always try to defeat anything that reflects India's greatness.

Excellent round table discussion with many perspectives. Good.

But the word "India " comes from Indus the river...

Good observation . India comes from Indus and not indigo. But the river was called Sindhu in ancient times. There is even a province named sind. however the original debate was whether"Bharat" is more ancient than"India".