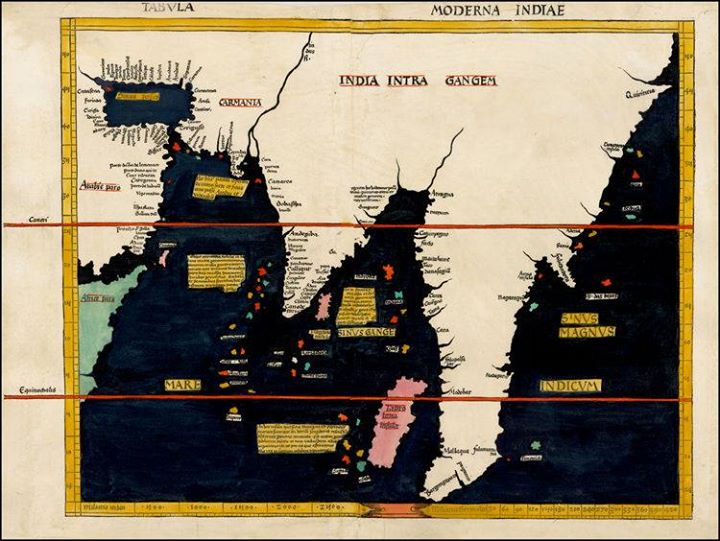 Book excerpt:
The geographical configuration of India, her early political development and her intellectual expansion all point to the frequency of regularised interstatal relations. Unlike Greece, the various states of India were not isolated from each other. Hills and dales were in plenty in this vast continent of India, but they did not help the development of autonomous city states as in ancient Greece. Although city republics were in existence, they did not form the ideal of political organization in ancient India : on the contrary the country state was the prevailing type of advanced political organisation. The territories of these country states were contiguous to each other and political development as well as commercial intercourse necessitated the observance of a bodv of rules governing such intercourse. India could not therefore develop what is called in the case of Greece " intermunicipal law." Her geography stood in her way. The political development of the ancient Indians also helped the growth of interstatal rules. The chief accusation brought against the Indians has been their utter lack of a perfected and lasting imperial organisation. The idea of imperialism had no doubt ruled the minds of men in India in the distant past long before the vista of a vast imperial organisation was opened up to the Indian eye by the invasion of the Persian Emperor Darius or the Macedonian conqueror, Alexander the Great. But the establishment of an empire in India was the exception and not the rule. This lack of an imperial organisation in India, however reproachful to the imperialistic school, was helpful to the establishment of a body of rules guiding the conduct of states in their daily intercourse with the other states, either in times of profound peace or in anxious times of war. Behind this fortuitous concourse of circumstances stood the ever present sanction of religion or Dharma which differentiated modern International Law from ancient International Law. Followers of Austin have denied the title International Law to rules based on religious sanction. They put their case too high. All laws are not laws according to the positive theory of Austin. Thus Jenks in his "Law and Politics
in the Middle Ages ' has shown that in mediaeval times there existed a body of rules propounded by merchant guilds, by the Church, or based on feudal customs which were laws but could not be regarded as " laws " according to the Austinian sense of the term. If that is the case with municipal law how very different would be the case with International Law ? International Law has not ceased to be law because admittedly up to the present day, it has lacked the element of sanction, or coercion in cases of infringement. Rules of International Law have been in the past based on moral persuasion followed by physical compulsion in cases of grave infringements. No common superior has yet enforced the sanction of International Law though time alone can prove if the "Big Five" in the contemplated League of Nations will be in a position to enforce obedience by making huge sacrifices of accumulated interests, or whether national pride and national prejudices will convert the league into a second Holy Alliance. Prophecy is risky but the contracting units appear restive.

The ancient Hindus did not lack in the idea of the positive sanction of law but they preferred to base the rules relating to interstatal relationship on Dharma or religion as the sheet anchor of common humanity. They had no special code of International Law but as will be seen later, their Dharmasastras and their Arthasastras lay down a body of rules guiding their interstatal relations under the title, Deshadharma. A careful study of Niti was particularly recommended by the Arthasastras as conducive to all-round prosperity. Thus, belief in the efficacy of a Science of polity as a condition precedent to progress leads to increased intercourse between states on approved lines.

Map description: Tabula Moderna Indiae Map Maker: Martin Waldseemuller Strassbourg / 1513 Hand Colored A striking example of Waldseemuller’s modern map of the Indian Ocean, India, Southeast Asia and contiguous regions, from the 1513 edition of Waldseemuller's Geographia. Waldseemuller's modern map covers most of Southern Asia and is centered on the Indian Ocean, extending from Arabia and the Horn of Africa to the Malay Peninsula and northward toward China. The map is based largely upon the Cantino world map of 1502 and the Ruysch world map of 1507. As noted by Greg McIntosh, the depictions of the Old World, especially the seas, peninsulas, and placenames of the littoral of the Indian Ocean, Red Sea, Persian Gulf, Arabian Sea, and Bay of Bengal . . . are derived, not from multiple introductions of Portuguese cartography into Italian cartography, but by the introduction of that Old World image in a single event, that is, the arrival of the Cantino planisphere in Genoa in November 1502 and its subsequent dissemination through traditional manuscript copying processes, particularly via the highly influential copy made by Nicolay de Caverio. . . . Regarding the transmission of placenames from the Cantino planisphere (1502) to the Caverio planisphere (c. 1503–04), and from the Caverio to Martin Waldseemüller, and from the Waldseemüller maps (1507–1516) to those of Schöner, Fries, Honter, and others (1515–1546), not only can we track, via placenames, inscriptions, and iconography, the maps-as-texts over a period of time, and not only can we see in each map the outcome or end result of a particular instance of the copying of large portions of manuscript text (placenames), but we can also watch some of the copying process by each individual mapmaker as it unfolds. The map is considered by some (see Suarez, Early Mapping of Southeast Asia) to be the first modern map of Asia. Cartographically, the map draws heavily from the Portugese discoveries first documented on Cantino's map. The Waldseemüller map follows the Cantino delineation with an arrow-shaped Indian subcontinent and a Malay peninsula, which is greatly exaggerated and extends too far south. Waldseemuller's map is the first to depict Sinus Magnus as the South China Sea. The small peninsula of 'Fulicandora', located directly above Sinus Magnus, represents the first earliest appearance of Indochina on a printed map. Sri Lanka and the Indian subcontinent are relatively correct in their sizes. This map is among the earliest documents recording the Portugese explorations into the Indian Ocean, and is of primary importance in the mapping of the India and Southeast Asia. The first modern atlas, prepared by Martin Waldseemuller using the translation of Mathias Ringmann. This is one of the most important editions of Ptolemy, containing many new regional maps. Twenty new maps based on contemporary knowledge were included by Waldseemuller, in addition to the traditional twenty-seven Ptolemaic maps derived from the 1482 Ulm edition. Martin Waldseemuller and his associate Mathias Ringmann, prepared this edition of Ptolemy, partly at the expense of Duke Rene of Lorraine. It was brought to completion by Jacobus Eszler and Georgius Ubelin. The atlas contains the first map in an atlas entirely devoted to America (Tabula terre nove), often called the "Admiral's map" after Columbus. The map of Lotharingia (the first map of the Duchy of Lorrain), printed in black, red and olive, is one the earliest examples of color-printing. This edition was reprinted in 1520 using the same woodcut blocks. Source: http://bit.ly/1QrvVQv

This is all History. Now only Deshadharma is corruption, bribe, cheating etc.