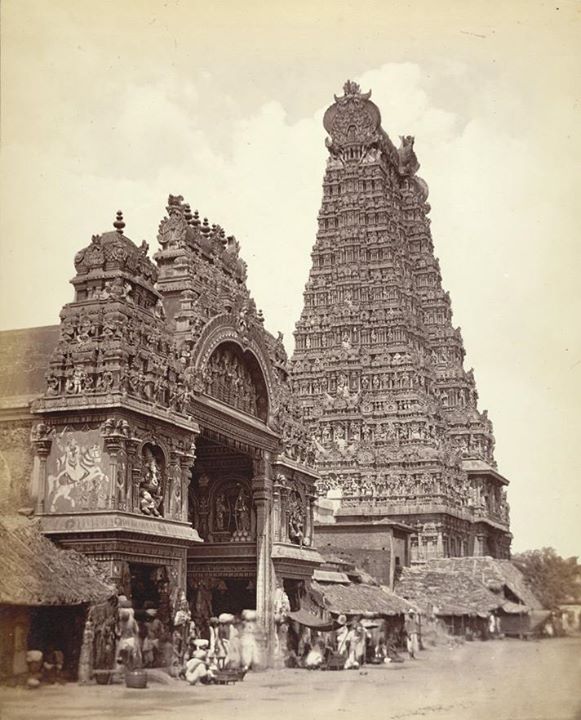 Photograph of a gopuram (tower) and entrance of the Minakshi Sundareshvara temple in Madurai, taken by Nicolas & Company in the 1870s. This great temple complex (dating mostly from the 17th century in its current form), dedicated to an ancient local goddess, is one of the chief pilgrimage sites of South India. It is enclosed within a rectangular precinct which covers 6 hectares and has 11 huge gopurams or towers, the biggest of which mark four entrances from the four cardinal points. These towers are extremely elaborate and completely covered with figures of divinities, celestial beings, monster masks and animals, all encrusted in plaster decoration painted in vivid colours. Inside the complex there are columned mandapams or assembly halls, tanks, shrines and the two temples of Shiva and his consort Minakshi. The photograph shows the great gopuram at the east end of the temple, with the gateway leading to the Porch of the Eight Goddesses, the main entrance to the temple, in the foreground. Street traders are gathered near the entrance.

Really a rare picture worth preserving

Marina Theisling . . . ich war schon mal hier. the whole templw is carved our of one rock.

Superb architecture of ancient time. Pity that Taj Mahal finds a place of pride in our tourist brochures but superior native architecture are neglected.

Funnily the british claim to have brought civilization to India, I mean duh!! What the hell were they thinking.

bless me anything comefrom this blessing

The pride of India!

Goddess doesnot Need any certificate or recognition from humans.as she is self luminous & illumine her whole creation.