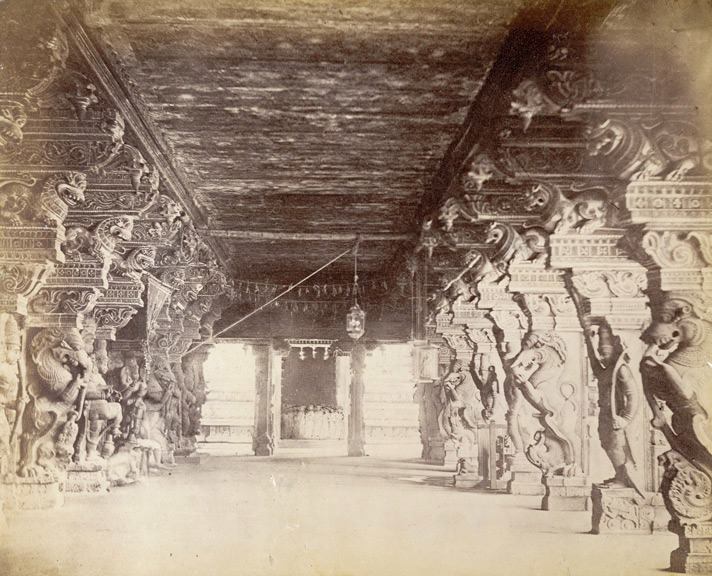 Photograph of the interior of the Meenakshi Sundareshvara temple, Madurai, Tamilnadu, from the Album of Miscellaneous views in India, 1860s . The temple complex at Madurai was built under the patronage of Tirumala (1623-60), one of the most prominent of the Nayaka rulers. The temple is dedicated to Shiva known locally as Sundereshwar (the handsome god) and Minakshi or Parvati (the fish eyed goddess). The temple complex is within a high-walled enclosure, at the core of which are two sanctums for Minakshi and Sundereshwar, surrounded by a number of smaller shrines and grand pillared halls. Especially impressive are the gopuras (pyramidical gatways) which rise to a height of over 50 m. They rise from solid granite bases and are covered with stucco figures of deities, mythical animals, monsters painted in bright colours. This view shows a columned mandapa or hall. The piers have rearing yalis, mythical animals and figures of divinities carved in full relief on their shafts. The brackets have pendant buds projecting outwards from seated yalis.

Tej are you making us yearn for India on prpose?

See the current one