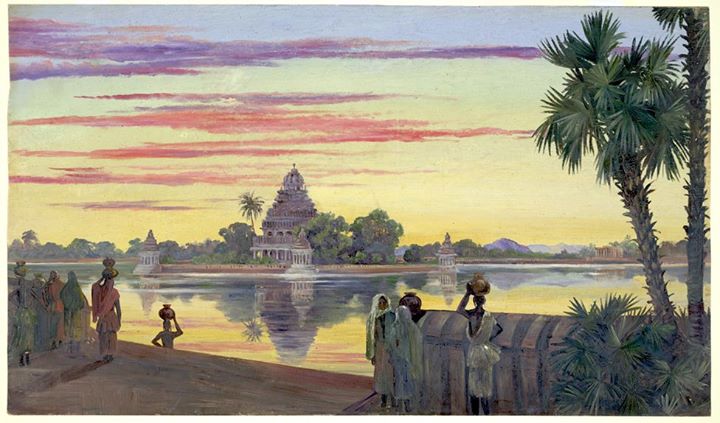 Oil painting on paper depicting the tank at Madurai by Marianne North, dated 1877-79.

Initially, Marianne North (1830-1890) painted botanical specimens and travelled around the world in search of interesting subject matter. She visited India in 1877-79 and completed over 200 paintings whilst there, at this point she was mainly painting landscapes. This painting is of the Vandiyur Mariamman Theppakkulam, a large temple tank about 5kms east of the Minakshi Sundareshvara temple at Madurai. It was built in the 17th century by Tirumala Nayaka and is the biggest of its kind in Tamil Nadu. In her autobiography, 'Recollections of a happy life' of 1892, Marianne North wrote, "I painted a sunset view of the grand tank outside the town, with its island-temple and palm-trees, grand old banyan-trees and other temples on its edge. The English people drive round and round it every evening, and make that drive their chief gossiping spot."