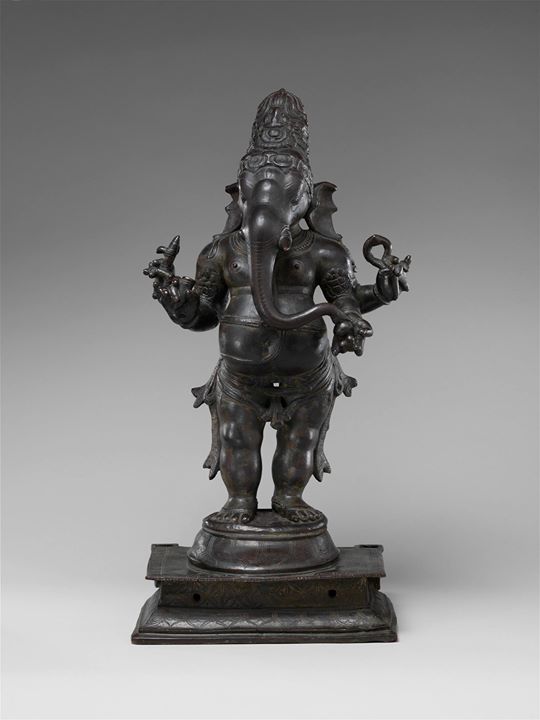 The potbellied, elephant-headed Hindu god Ganesha is venerated throughout India. He is believed to bestow success and abundance through his control of obstacles. Before any important task is begun, an offering is made to Ganesha, the son of Shiva and Parvati. In his upper left hand, he holds a lasso; in the upper right, a battle-ax; in the lower left, a sweet (one of his favorite treats); and in the lower right, one of his own tusks, which he broke off in a fit of anger and hurled at the moon.

'one of his own tusks, which he broke off in a fit of anger and hurled at the moon.' This is a version I've never heard before. Where did you get it from? References?

Text and image credit: © 2000–2016 The Metropolitan Museum of Art In fact I have taken the liberty of deleting the more 'unusual lines' in the description of this statue. http://bit.ly/23ZvAxS

'His origins are probably tribal, and his elephant head may derive from masks used in rites of passage.' Unusual, indeed- but more irritating than offensive. ALL Hindu gods are tribal gods. The idea they aren't stems from the old Aryan-Dravidian theory that holds no water these days. And Rites of Passage rituals usually hold some idea of ritualistic rebirth, not dehumanization. Neither of which, however, is associated with Ganesha- though it does figure in several other customs such as the Brahmin thread ceremony or the Hair offering. I'd say an intern wrote this stuff- probably one specializing in generic 'Asian studies'. Not unexpected considering the level of scholarship when it comes to Indology.

Did some research myself. The Moon story seems to from Central India and relatively unknown to the rest of us. The Padma Purana version still remains 'mainstream', I'd say- so it seems our intern hasn't been paying much attention in their classes.

Yes. Most of the descriptions for the online collections of museums are probably written by freelancers. Bound to have many inaccuracies.