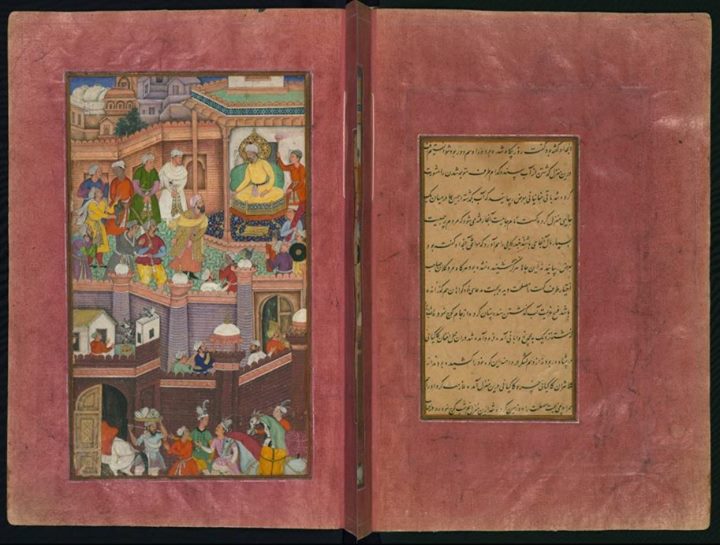 Walters manuscript W.596 is a copy of the Baburnamah. Recognized as one of the world's great autobiographical memoirs, the Baburnamah is the story of Zahir al-Din Muhammad Babur (866 AH/AD 1483-937 AH/AD 1530), who conquered northern India and established the Mughal Empire (or Timurid-Mughal empire). Born in Fergana (Central Asia), Babur was a patrilineal Timurid and matrilineal Chingizid. Babur wrote his memoir in Chaghatay Turkish, which he referred to as Turkic, and it was later translated into Persian and repeatedly copied and illustrated under his Mughal successors. The present copy in Persian, written in Nasta'liq script, is a fragment of a dispersed manuscript that was executed in the late 10th century AH/AD 16th. The ordering of the folios as found here does not follow the narrative of the text. The Walters' fragment contains 30 mostly full-page paintings that are representative of the Mughal court style under the Mughal Emperor Akbar (reigned 963 AH/AD 1556-1014 AH/AD 1605). Another major fragment of this work containing 57 folios is in the State Museum of Eastern Cultures, Moscow. The dark green leather binding, which is not original to the manuscript, dates to the late 13th century AH/AD 19th or early 14th century AH/AD 20th.

Dear RBSI, you are posting so many of these wonderful treasures so fast...I am having trouble keeping up. Time nahi hai..OMG.

He was robber...looting around world...what shall i conclude from his rotten auto bio...to be looter....if i had been during his time...i would have immeresed him into gutter and de dana dan...

Let's not spread hate Rupesh Singh. This is a source for information to learn and understand what happened. Also, don't forget somebody looted Babur too..he was orphaned at a very young age and traveled to India a very young boy.

RBSI is a forum to learn and unlearn. Not to conclude carelessly and spread hatred.

Haaa..rita dhawan..pls mam...dont turn reality into false one...history is to make mankind rmber and learn what mistakes humanity did before.u cannot close ur eye from reality just to be socialist..as it has became fashion in india at present.if someone looted babar so he came to loot india is illogical...and indian tradition were not of looters...or keeping the defeated king wives as slave..or religious conversion.it will be no surprise if u debate that gen dyre was a good person..who challenged the whole innocent and without armed crowd in jalianwala that ..indians i wont say twice..i was lieutenant in british army during world war and i have superior british blood in me..if u want to save ur life leave the place....and later what he did everyone know the history.pls call spade a spade...nothing to spread hatred but to speak reality...or else the fun of reading books doesnt matter.

Rare book society of india...i dont understand why u got chillies from my comment.i have my own views and put forward and probably every indian knows..who was babar..or ghori or taimur or khilji..and why they came to india.

You are right about one thing, we all know what happened in the past starting long before Babar came to India. We all are upset and angry. But we are not insulting or threatening to kill anyone. What happened in history of India....before Islam came to India? There were many Hindu kings who killed each other and their own family to get the throne. Shall we go back to Ramayan or Mahabharat or Ashoka or may be talk about the Rajputs and so on the list goes. But that was then.... !!!!

Rita dhawan..i knew u will put this logic.....internal politics...fight for supremacy..extend the part of kingdom was practiced by the kings not only in india but all parts of world..but i don't see any king of india ruled right from afghan or sudan to srilanka or himalayas raided any other country just for looting or making slaves.thers a thin line between barbarism and conflicts to understand.hindus spread jainism or budhism for peace outside or else ashok or many other kings were capable to raid other countries.so many countries together raided india...and i m proud our ancestors fought them bravely...fact is hinduism is the religion faced the more barbaric attack from muslims and christs.i m surprised to hear ill..logic of mahabharat or ramayan....its moral is of peaceful means and not for jihad or become make people convert like christ for heaven.well...if rana sanga would not have invited ousider for help or persons like jaichand or dhanand did not exist..our history would have been diff...personally i would love to read bio of nathuram godse...u may call him murder but i call him ideology... As i said thin line to understand between barbaric and conflict.

Rupesh Singh - Of course you are entitled to your opinion. And truly none of us really know what actually happened. We are only trying to surmise by conjecture and evidence. Our objection is not to your opinion but to your expression and adjectives. Tone down. Please note inflammatory comments will be automatically deleted.