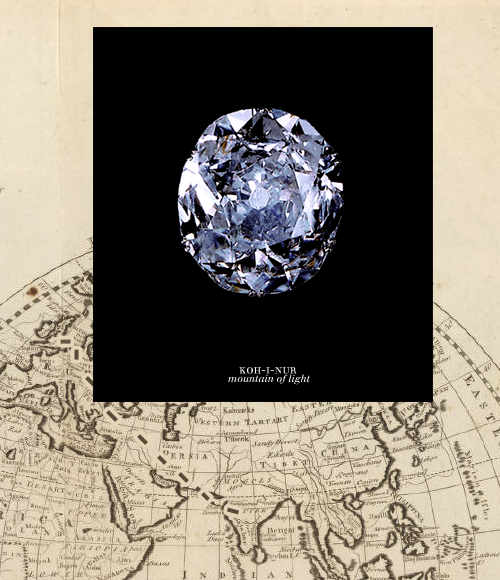 Kohinoor Diamond - It's History
by www.DiscoverSikhism.com

An appendix article on the Kohinoor diamond from the book 'Maharaja Duleep Singh - The King In Exile'.

According to N.B. Sen, the Kohi-i-Noor, the king of diamonds and the diamond of kings was found in the ancient mine of Kolar, situated on the right bank of the Krishna river in Karnataka. Others write that this famous diamond was either discovered about 5,000 years ago in the bed of the lower Godavari river, near Machlipatnam in Central India, or in the Golkunda mines in Andhra Pradesh or in the hills of Amaravati in Maharashtra.

The Mughal Emperor Zahiruddin Muhammad Babur (1526-1530 AD) valued this peerless diamond, 'the Koh-i-Noor', at "Two and half days' food of the entire world". But his son Nasiruddin Muhammad Humayun (1530-1556 AD)said, "Such precious gems cannot be obtained by purchases; either they fall to one by the arbitrament of the flashing sword, which is an expression of Divine Will, or else they came through the grace of mighty monarchs". When Maharaja Ranjit Singh (1799-1839) the Sikh Ruler of Punjab, asked the exiled Afghan King Shah Shuja-ul-Mulk of Afghanistan about the value of the Koh-i-Noor, he replied that its price was Sword / heavy stick / blows. He also added that its value is good fortune.

The Koh-i-Noor gem is not known to have ever been bought or sold. It always changed hands as a result of conquest. This magnificent and matchless diamond had passed from conqueror to conqueror as a symbol of power and glory and was regarded as the greatest treasure in India. Its value was beyond estimate. The history of this gem is linked with royalties of various countries and of various ages.

Strictly "legally" speaking, it was indeed gifted to the British, BUT by it's owner, a 10 year old boy! Similarly Shivaji's Sword was also "gifted" by 9 year old Maharaja of Kolhapur. I feel this attempt to bring back Kohinoor is a waste of time. Pakistan, Bangladesh, Afghanistan and Iran , all put a claim to it. Rather we preserve what is there in our museums.

One cannot revert history or its facts. So why try to turn back the hands of time ? Let the Kohinoor rest in peace & let us be conscious in preserving the numerous other historical heritages that are indeed in India.

well said, we cannot trust our own shortcomings. At least this way the world gets to see it....as long as they acknowledge acquiring it was the greatest scam ever. duped a little boy...!!!!

where it is now its well respected. I have seen it

i would have loved a mention of Nizam of Hyderabad too!

Akshay Chavan and wheere is the Shivaji's Sword now ?

I disagree Akshay with one fact - that it was gifted. (Gift means you give away your precious belonging willingly). It was not a gift but a forceful snatching.

ifnot the Kohinoor..then atleast the British Royals should return such items like historical swords, books etc .....