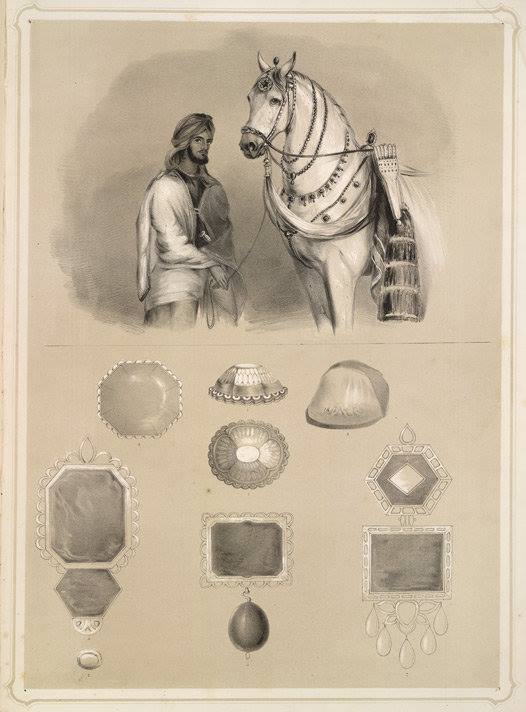 Horses and jewels of Runjeet Singh - 1844

This lithograph is taken from plate 14 of Emily Eden's 'Portraits of the Princes and People of India'. It shows one of the favourite horses of Maharaja Ranjit Singh with the head officer of his stables. Passionately fond of horses, Singh had them adorned with costly jewelled trappings, mostly emeralds, which were said to be worth more than £300,000. He inspected his numerous horses daily and on special occasions they were adorned with the finest jewels of his treasury, including 'KOHINOOR', at the time the largest diamond known to exist.

Singh sent his large collection of precious stones to the Governor-General's camp for the ladies to inspect. Eden drew and numbered several of them. Number 1 is the Kohinoor, which was originally taken from the Peacock Throne at Delhi by Nadir Shah and later extorted by Singh from Shah Shuja of Afghanistan. Number 2 is a pearl: Ranjit considered pearls next in value to the Kohinoor, and had long strings of them. Number 3 is an uncut ruby with Persian characters engraved upon it. Number 4 is a Topaz, which stone, wrote Eden, Indians valued more than Europeans. Numbers 5, 6 and 7 are emeralds from the trappings of the horse.

In "Up the Country" painted by Emily Eden, fourth in midlle is 'Kohinoor'

Well..the real fact is ..queen of england made ranjit singh fell into his love trap and took kohinoor with him ...it was huge conspiracy made by British royal family...and second theory is ranjit singh would used to keep kohinoor under his pillow every night before going to bed as it was close to him..and british queen robbed it while ranjit singh was sleeping and took to england.british were not only looters but robbers also.

not at all... HM Queen Victoria RI, had nothing to do with Indian territory and Maharaja Ranjit Singh of Punjab. As India was ruled by a company-East India Company. it was only in 1877 that East India Company gave control of India to the British Government.

Well...rahul....east india company was nothing more than dcompany at present in india....dcompany directs terrorist activity in india and similarly e.i.c. was meant to destroy and loot the other country for which unfortunately india fell its prey....its illogicl ranjit singh would have willingly and happily gave kohinoor to Britishers.... there was certainly some conspiracy...think logical..bro.