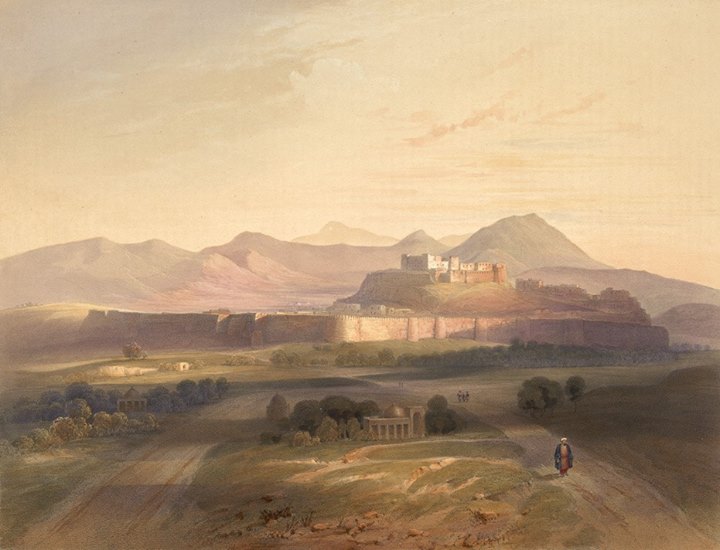 Digital Rare Book :
The History of India : As told by its own historians - The Muhammadan Period.
Edited from the posthumous papers of Sir H.M. Elliot
By Professor John Dowson
Published by Trubner & Co., London - 1871
Volume II

Image:
This lithograph was taken from plate 18 of 'Afghaunistan' by Lieutenant James Rattray in 1848.

This sketch was made near some mosques outside the Kandahar Gate to the west side of Ghazni, a city Rattray visited several times. Ghazni had enjoyed its principal moment of glory 800 years earlier when it was the capital of an empire extending from the Armenian mountains to the fertile plains of the Ganges.

Rattray wrote that it was now again well-known, "thanks to our love of territorial aggrandisement, and the occasional desertion of war's fickle deity from our ranks". He described riding slowly over a wide plain, dotted with relics of past ages, to Ghazni: "Interspersed with this havoc of centuries, as far as the eye could reach, were a succession of rich groves, vineyards, flower-gardens, melon-beds and orchards [while] in the blue distance, its white structures just discernable from the mountains it springs from, rested Ghuzni, with its bastions, town and citadel."

On 6 September 1842, Ghazni was for a second time wrested from the Afghans by the British under General Nott. On taking possession of the city, the engineers were given two days to blow it up. When Rattray last glimpsed it, "far-famed Ghazni was a heap of smoking ruins".