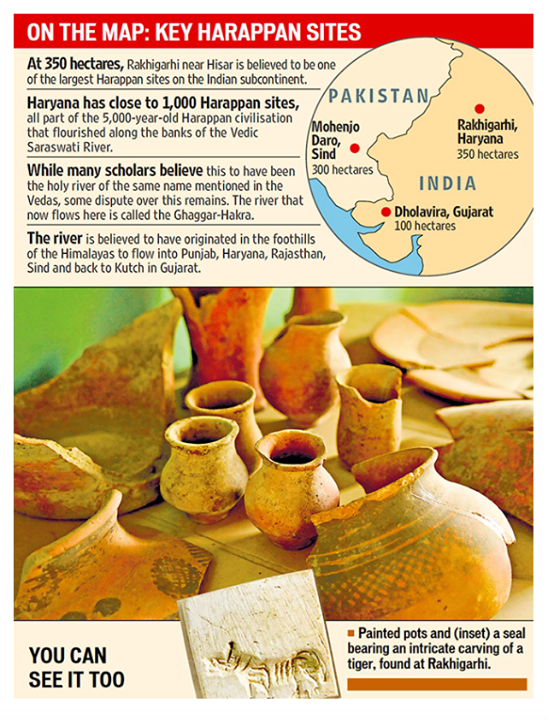 Article:
What did Harappans eat, how did they look? Haryana has the answers
By Riddhi Doshi
Hindustan Times | May 17, 2015

Along the banks of the Ghaggar-Hakra river lie the graves of a typical family. The woman was likely the daughter of a wealthy trader. In death, she wears her favourite shell and copper bangles. A large pot placed at her head would have been filled with foodgrain and objects meant to make her journey to the next world a comfortable one.

She is buried in the centre of a large graveyard, as are most women. This, and the large number of objects in the women's graves is believed to indicate that women had wealth and status in this society. Buried beside her is the body of a boy, most likely her son, who probably died at the same time. Close to her, his head pointing north as well, lies the grave of a man, most likely her husband. Their home would have been one of those in the 'urban' settlement outside the graveyard.

The houses here are rectangular, with three or four rooms each, made of mud and baked bricks in extra-strong layers of alternating horizontal and vertical tiers. The floor is covered in clay, decorated in a mosaic of coloured stone. A small granary attached to the home, also made of brick, kept their food safe.

"After days of excavation, we reached a depth of 14 metres and I thought we were done," says Yogesh Yadav, a PhD scholar at Deccan College. "But we weren't. The trench was a phenomenal 8 metres deeper, with a whole lot more to unearth."

Through the layers, one can trace the Harappan culture's economic growth, its advancements in architecture, art and crafts, and even aspects of the structure of their society.

"Nowhere on this or any other Harappan site has there been evidence of a culture of slaves or any kind or of work done through the use of force," says Shinde. "This suggests a relatively equitable society where work was done collectively."

Is this a rare book ?

Waiting for the reconstruction of the facial features. Still to come.

Yes of course! This is indeed a very scarce and rare book!