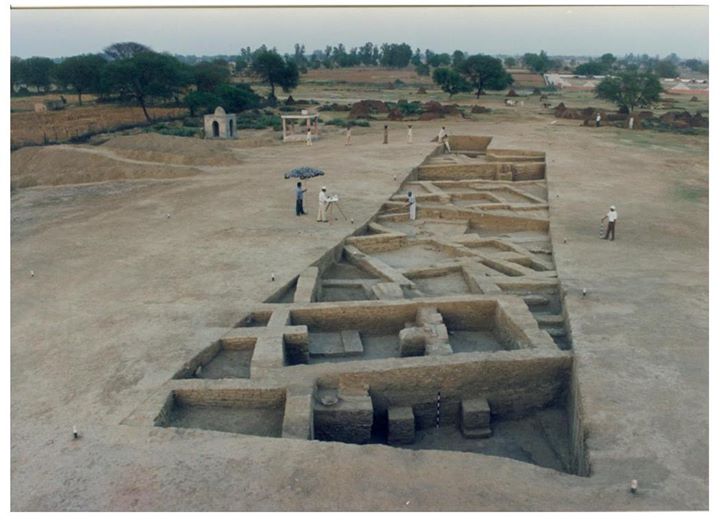 The present report unfolds discovery of the earliest civilization of South Asia that flourished at Rakhigarhi, Haryana India during the fourth- third millennium B.C. The cultural milieu typifying the civilization was first reported in the Indus plains at Harappa (1921) followed by Mohenjodaro (1923), subsequent fieldwork witnessed the distribution of these sites in parts of Punjab, Sindh, Baluchistan and Gujarat.

After the partition in the subcontinent into two independent republics of India and Pakistan, majority of the Indus sites fell in the political territories of Pakistan, leaving Kotla Nihang Khan, Roper on the Satluj and Rangpur on the Bhadar in Kathiawad within the territory of the India. Thereafter, substantial explorations were carried out to trace the signs Indus civilization in the borderlands of Punjab, Haryana, Rajasthan and Gujarat. Continuous efforts have brought to light large number of sites on the one hand in the Saraswati- Ghaggar- Hakra- Drishadvati valley and in the upper reaches of the Yamuna- Hindon divide, besides Gujarat and upper reaches of the Godavari in Maharashtra. In view of the above distribution pattern of the sites, scholars may argue the nomenclatures, Indus Valley‟ given to this cultural milieu in the light of discovery larger number of on plains of the Sarasvati -Ghaggar-Hakra-Drishadvati. Without debating the issue here it is preferred to identify the cultural components after the type site: Harappa (i.e. Harappan Civilization) as is understood by majority of scholars working in the field. Now the signature of the Harappan Civilization in extended over a vast area covering the northwestern part of the subcontinent. It extends in the north- Manda in lower Jammu and Kashmir and Shortughai in upper Afghanistan, in the south to Daimabad covering more than 1600 km, in the east Alamgirpur and in the west to Sutkaghar Doe covering more than 1600 km. It may not be out of place to record that the area covered by the Harappan Civilization is more than that of the contemporary civilization of Egypt and Mesopotamia.

Dr Amarendra Nath, the writer of this report & ASI director was put behind bars for a theft of approx. Rs 2.5 lacs of forged bills at Rakhigarhi. Many believe that he is a victim of internal ASI infighting. Sorry state of affairs in an important government organization. Dr Nath's arrest caused a break in the Rakhigarhi research work & gave a foothold for Dr Shinde & his Deccan College team from faraway Pune, to begin their field work. ASI budgets for excavation, conservation & preservation at key sites are still too small to undertake the work these sites deserve. Cutting corners for personal gain is common-place. ( see -> http://www.hindustantimes.com/punjab/former-archaeological-survey-director-sentenced-to-jail-for-fraud/story-PY4UDmliPR8nP174sVa4kK.html )