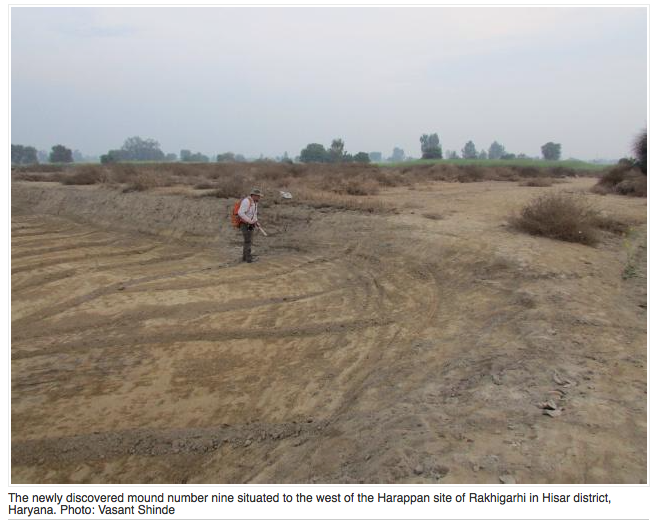 The discovery of two more mounds in January at the Harappan site of Rakhigarhi in Hisar district, Haryana, has led to archaeologists establishing it as the biggest Harappan civilisation site. Until now, specialists in the Harappan civilisation had argued that Mohenjo-daro in Pakistan was the largest among the 2,000 Harappan sites known to exist in India, Pakistan and Afghanistan. The archaeological remains at Mohenjo-daro extend around 300 hectares. Mohenjo-daro, Harappa and Ganweriwala (all in Pakistan) and Rakhigarhi and Dholavira (both in India) are ranked as the first to the fifth biggest Harappan sites.

“With the discovery of two additional mounds, the total area of the Rakhigarhi site will be 350 hectares,” asserted Professor Vasant Shinde, Vice-Chancellor/Director, Deccan College Post-Graduate & Research Institute, a deemed-to-be university in Pune. The two mounds are in addition to the seven mounds already discovered at Rakhigarhi, about 160 km from New Delhi. The eighth and ninth mounds, spread over 25 hectares each, are situated to the east and west of the main site. Villagers have destroyed much of these two mounds for cultivation. A team of archaeology teachers and students of the Deccan College discovered them when they surveyed the site in January.

Dr. Shinde, a specialist in Harappan civilisation and Director of the current excavation at Rakhigarhi, called it “an important discovery.” He said: “Our discovery makes Rakhigarhi the biggest Harappan site, bigger than Mohenjo-daro. The two new mounds show that the Rakhigarhi site was quite extensive. They have the same material as the main site. So they are part of the main site. On the surface of mound nine, we noticed some burnt clay clots and circular furnaces, indicating this was the industrial area of the Harappan site of Rakhigarhi.”

Dr. Shinde had earlier led the excavations done by the Deccan College at the Harappan sites of Farmana, Girawad and Mitathal, all in Haryana.