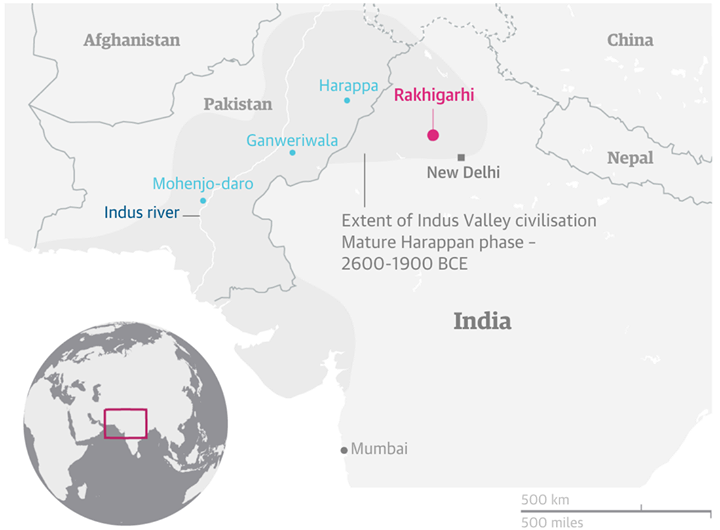 Article:
DNA could solve mystery of the Indus Valley civilization that ruled Asia during the Bronze Age
By Jason Burke
The Guardian - Feb. 2, 2016

The origins of the people of the Indus Valley civilisation has prompted a long-running argument that has lasted for more than five decades.
Some scholars have suggested that they were originally migrants from upland plateaux to the west. Others have maintained the civilisation was made up of indigenous local groups, while some have said it was a mixture of both, and part of a network of different communities in the region. Experts have also debated whether the civilisation succumbed to a traumatic invasion by so-called “Aryans” whose chariots they were unable to resist, or in fact peaceably assimilated a series of waves of migration over many decades or centuries.

The new data will provide definitive answers, at least for the population of Rakhigarhi.

“There is already evidence of intermarriage and mixing through trade and so forth for a long time and the DNA will tell us for sure,” Shinde said.

The conclusions from the new research on the skeletal DNA sample – though focused on the bronze age – are likely to be controversial in a region riven by religious, ethnic and nationalist tensions.

Hostile neighbours India and Pakistan have fought three wars since winning their independence from the British in 1947, and have long squabbled over the true centre of the Indus civilisation, which straddles the border between the countries.

Shinde said Rakhigarhi was a bigger city than either Mohenjo-daro or Harrapa, two sites in Pakistan previously considered the centre of the Indus civilisation.

Some in India will also be keen to claim any new research supports their belief that the Rig Veda, an ancient text sacred to Hindus compiled shortly after the demise of the Indus Valley civilisation, is reliable as an historical record.

The question of links between today’s inhabitants of the area and those who lived, farmed, and died here millennia ago has also prompted fierce argument.

There are other mysteries too. The Indus Valley civilisation flourished for three thousand years before disappearing suddenly around 1500 BC. Theories range from the drying up of local rivers to an epidemic. Recently, research has focused on climate change undermining the irrigation-based agriculture on which an advanced urban society was ultimately dependent.

Soil samples around the skeletons from which samples were sent for DNA analysis have also been despatched. Traces of parasites may tell archaeologists what the people of the Indus Valley civilisation ate. Three-dimensional modelling technology will also allow a reconstruction of the physical appearance of the dead.

“For the first time we will see the face of these people,” Shinde said.

Thank you for sending the same

THE SARASVATI IS MENTIONED IN THE VEDAS AS A FLOWING RIVER & RECENT INDIAN RESEARCH FOUND THE SARASVATI DRIED UP 4 & HALF THOUSAND YEARS BACK? SO 1500 BC???

Here - feast your eyes on Rakhigarhi mounds, this winter. Small hills of dung cakes ( to be used as fuel for keeping warm ) sit atop the ancient mounds.

Meet Wazir Chand . The scientific community has intervened very late. The villagers had been selling finds from this site to bounty hunters for the past 20 years. Wazir Chand was one local resident who didnt sell & built up a collection which he housed in a room at his home, for visitors to see. But as the value of the finds went up, some of it was stolen from him at gun-point & the rest he donated to the ASI. Its this collection which forms the base of what you get to see of Rakhigarhi at the Chandigarh museum. Wazir Chand himself had been highlighting the importance of the site through the 1980s but didnt get much support. Its selfless folks like him who we should thank for whatever little has been preserved. Even today, the site lacks basic infrastructure for researchers/visitors/journalists so it comes down to personal help from Wazir Chand & his family. He continues to dream of some government support for a site museum at Rakhigarhi.

Thank you Ratnesh Mathur! He is indeed a rare man.

Really looking forward to it.