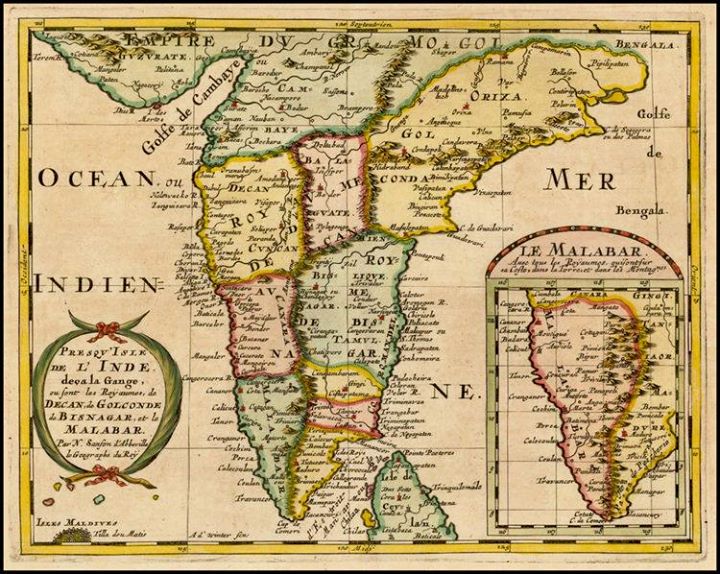 Digital Rare Book:
India in the fifteenth century : being a collection of narratives of voyages to India, in the century preceeding the Portuguese discovery of the Cape of Good Hope ; from Latin, Persian, Russian, and Italian sources, now first translated into English
By Richard Henry Major (1818-1891)
Printed for The Hakluyt Society, London - 1857

Kamal-ud-Din Abd-ur-Razzaq ibn Ishaq Samarqandi (Persian: کمال‌الدین عبدالرزاق بن اسحاق سمرقندی, 1413–1482), was a Timurid chronicler and Islamic scholar. He was for a while the ambassador of Shah Rukh, the Timurid dynasty ruler of Persia. In his role as ambassador he visited Calicut in western India in the early 1440s. He wrote a narrative of what he saw in Calicut which is valuable as information on Calicut's society and culture. He is also the producer of a lengthy narrative or chronicle of the history of the Timurid dynasty and its predecessors in Central Asia, but this is not so valuable because it is mostly a compilation of material from earlier written sources that are mostly available from elsewhere in the earlier form.

Abd-ur-Razzaq was the ambassador of Shah Rukh, the Timurid dynasty ruler of Persia to Calicut, India, from January 1442 to January 1445. He wrote a 45-page narrative of this mission to India. It appears as a chapter in his book Matla-us-Sadain wa Majma-ul-Bahrain (مطلع السعدين ومجمع البحرين) (The Rise of the Two auspicious constellations and the Confluence of the Two Oceans), a book of about 450 pages which contains a detailed chronicle of the history of his part of the world from 1304 to 1470 and which takes much of its contents from other writings.

Abd-ur-Razzaq's narrative of his visit to India includes describing the life and events in Calicut under the Zamorin and also of the Ancient City of VIJAYANAGARA at Hampi, describing their wealth and immense grandeur. He also left accounts of the shipping trade in the Indian Ocean during the 15th century. (Wiki)