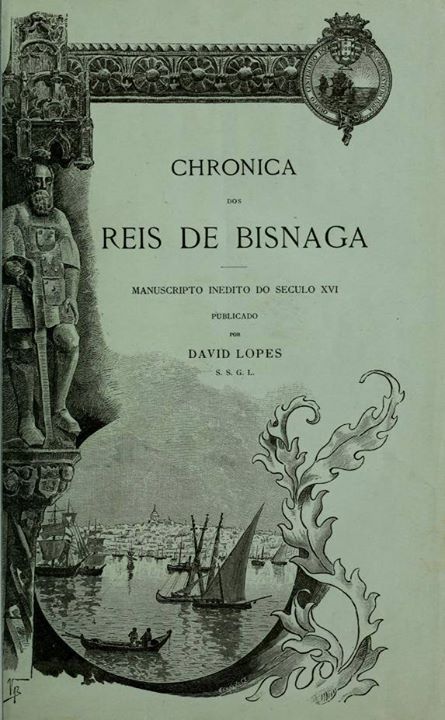 The Chronica dos Reis Bisnaga or, Castilian, Chronicle of the Kings of Bisnaga, is a sixteenth century original compilation of correspondence and two travel books of the era scribes Portuguese Domingo Paes and Fernão Nunes, in which describes in detail the history and contemporary life of the Vijayanagara Empire, the main trading partner of the Portuguese Empire in South Asia.

No one knows for sure who took the trouble to collect the records of both travelers and rewrite by hand, but his work is unique compared to the original, which has stood the test of time. The Chronica was considered lost for centuries until the late nineteenth century Portuguese historian David Lopes found a copy written in Persian in the archives of the National Library of France and translated into Portuguese.

Chronica consists of 123 pages grouped into two parts. The first part reaches eighty-page chronicle is Fernão Nunes, historians dated by the year 1535. It is a historical essay which tells the history Bisnaga and their struggles with their Muslim neighbors North, with special attention to the reign of Krishna Deva Raya, plus details of some customs and laws of their society. After an introductory paragraph written by Portuguese unidentified source starts the second part, the chronicle of Domingo Paes. This chronicle is dated somewhat earlier than the first, around 1525, and also talks about the history of Vijayanagara but gives much more weight to other aspects of the Empire and its commercial dimension, architecture, religion and customs, bureaucracy and in ultimately, every day of the city and its empire.

It is an interesting royal genealogies indicate that both chroniclers differ in many respects, both among themselves and the official genealogy from modern studies.

I have Mechanism of Heavens 1850 version print....