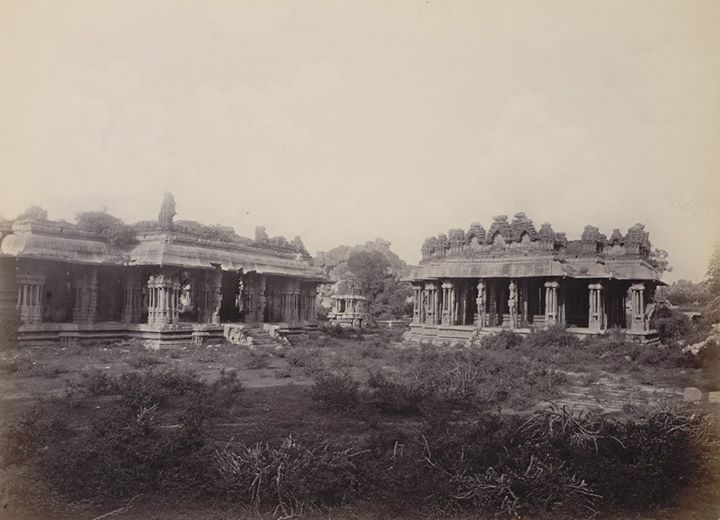 Introduction:
The history of the empire of Vijayanagar, which till recently was as good as lost to us, was recovered through the efforts of Mr. Robert Sewell, whose work in South Indian Archaeology and Epigraphy naturally gave him the qualifications to take up the work. He brought out his work ' A Forgotten Empire ' of Vijayanagar early in 1900 based upon his previous knowledge of the antiquities of the Madras Presidency, and of the information he derived from two Portuguese chronicles which were unearthed in the archives of Lisbon, and which he translated and appended to his work. Excellent as the work was for the time, and for the sources and historical material at his disposal, it suffered from the neglect of the evidence available in various forms in literature which go a long way towards filling up the many gaps that Epigraphy leaves in respect of that history. These sources are collected together in the following pages and they will speak for themselves. A constructive study of these goes a long way in correcting the chronicles in many places, and conveys information which would make a fuller history of the Empire of Vijayanagar possible. It is these untapped sources only that are brought together in the following extracts from various works, Sanskrit and Telugu principally, which bear on the particular period. Many of these are taken from manuscripts and published works now out of print. Some of the passages extracted are taken from works which may be available, but not in a form that would be useful to students not acquainted with Telugu. There is besides the advantage of these being brought together in a collection which otherwise it would be possible for one to get at only by voluminous reading. Each one of these extracts is provided with an English introduction which without pretending to be a literal translation of the passages, contains a faithful summary of the historical facts traceable in the extracts.

Image:
Photograph of the ruins at Vijayanagara from the 'Photographs to Illustrate the Ancient Architecture of Southern Indian' collection, taken by Edmund David Lyon in c. 1868. Vijayanagara, the City of Victory, was the most powerful Hindu kingdom in Southern India from 1336 until the defeat by the Muslim armies in 1565. It was built on the bank of the Tungabhadra River and is surrounded by granite hills. The ruins of this vast royal city incorporate distinct zones and are divided into two main groups, the sacred centre and the royal centre. This photograph features the Garuda shrine in the form of a stone chariot in the centre, with mandapas to either side. These structures are all a part of the Vitthala Temple complex.

Its a very good book compiled with lots of labours. I have taken many references to write articles for my website - http://www.madhvahistory.com.

Raghothama Rao C: Congratulations! You have created a brilliant and well researched website!

Thank you. I am benefitting from your informative posts and links to good books.

Glory of the past

My father used to say ''the book you don't find at North India(Aryan region) will be found at South India(Dravidian region).

Should have when ya could have !!

I will visit dis place.. Humpi

Vijayanagar destroyed due to enemity with the then biggest Hindu empire of kalinga Gajapatis.real culprit was prime minister Timirasu.who guided for war with gajapatis of odisha.the continuous 100yrs of war with mighty gajapatis paid its price.

This book is rear compilation of artifacts. The main problem is the historical aspects of the book. Every history is book is written by British and they write it the way they see the world and make everyone believe the same

I till not read it.

Should have been a gradual process of decline due to economical reasons then but that is not the case. It was plundered and destroyed by Islamic invaders

Plundered at last by Islamic forces but reduced her might by continuous aggression with kalinga empire from 1430 to 1526.

Vijaynagara ....fascinating. Look forward to knowing more about it.

One needs to be in peace when you visit this place. There is a pretty good chance that the blood will boil once you see the destruction of such a glory. I went with many friends and everyone became emotional. That is a historical blunder committed in a war. But everyone gave hate speeches after visit. It happens in every war. Bomian Buddha statues were destroyed by Taliban.

I feel proud to live near this great historical site. I visit this place quiet often. Every time I visit here a new page of history unfolds .. great info thanks to admins for showing the pages of untold history ..

This is the aerial view of Vittalaraya temple clicked by me..

Is authentic book available on history of vijayanagar empire by SK iyyangar.

Sir pl let me know the cost of the book.

Kindly send full address or email of your society in my email address is das.shu@gmail.com as I shall be greatful to you