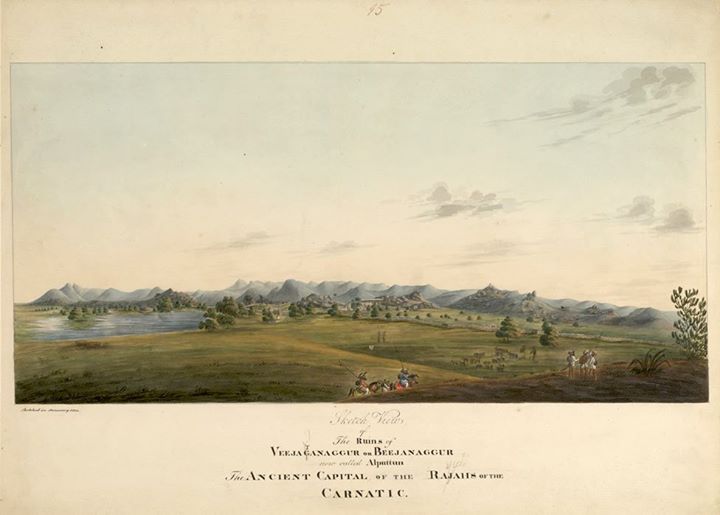 A translation of the "Chronica dos reis de Bisnaga" written by Domingos Paes and Fernão Nunes about 1520 and 1535, respectively, with historical introduction.

Just three years after the publication of the work of Lopes, an Englishman Robert Sewell published 'A Forgotten Empire: Vijayanagar. A contribution to the History of India',. Sewell's work is a historiographical account of the birth, development and decline of the Empire and its rationale, the defense of the identity of the Hindus against Muslim invaders. In the last part he includes the original 'Chronica' of Paes and Nunes and according to his own translation of Portuguese.

Book Extract :
These documents possess peculiar and unique value; that of Paes because it gives us a vivid and graphic account of his personal experiences at the great Hindu capital at the period of its highest grandeur and magnificence — "things which I saw and came to know" he tells us — and that of Nuniz because it contains the traditional history of the country gathered first-hand on the spot, and a narrative of local and current events of the highest importance, known to him either because he himself was present or because he received the information from those who were so. The summaries of the well-known historians already alluded to, though founded, as I believe, partly on these very chronicles, have taken all the life out of them by eliminating the personal factor, the presence of which in the originals gives them their greatest charm. Senhor Lopes, who has published these documents in the original Portuguese in a recent work, writes in his introduction : " Nothing that we know of in any language can compare with them, whether for their historical importance or for the description given of the country, and especially of the capital, its products, customs, and the like. The Italian travellers who visited and wrote about this country — Nicolo di Conti, Varthema, and Federici — are much less minute in the matter of the geography and customs of the land, and not one of them has left us a chronicle." They are indeed invaluable, and throw an extraordinary light on the condition of Vijayanagar as well as on several doubtful points of history.

Image:
Water-colour drawing by Colin MacKenzie of the ruins of Vijayanagar, dated 1801. The drawing is inscribed on the front in ink: 'Sketch View of the Ruins of Veejayanaggur or Beejanaggur now called Alputtun. The Ancient Capital of the Rajeels of the Carnatic. Sketched in January 1801.'

Vijayanagara, the "City of Victory", founded by the brothers Harihara and Bukka in 1336, was the capital of the most powerful Hindu kingdom in Southern India until the defeat by the Muslim armies in 1565. The city was established on the site of the village of Hampi situated in a spectacular rocky landscape along the southern bank of the Tungabhadra river and covered an area of at least twenty-six square kilometers. This natural setting offered natural protection and had important mythological significance as the river and the surrounding hills were associated with episodes from the Ramayana epic. Despite a pillage of six month after the defeat of the Battle of Talikota, numerous structures have survived. The ruins of the royal town incorporate distinct zones. On the south bank of the Tungabhadra river, around the village of Hampi, there are temples and small shrines that form the sacred centre. An irrigated valley to the south separates this area from the fortified urban core enclosed by massive fortifications. This contains temples, gateways, tanks and wells. At the south-western end there is the royal centre surrounded by high granite walls.