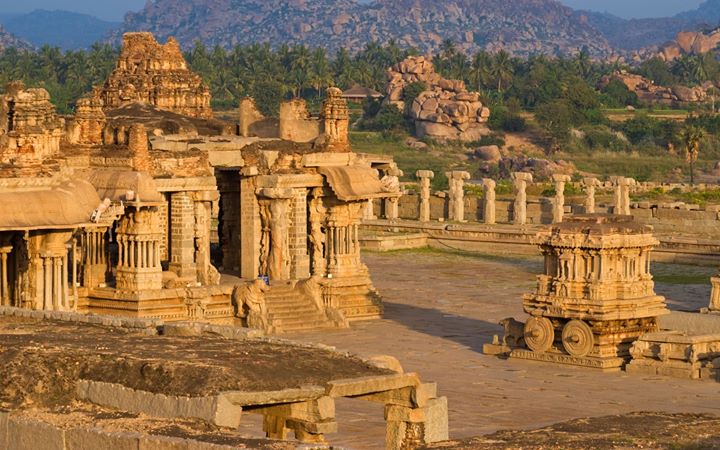 The history of the Vijayanagar empire, ruins of which now house Hampi, is dotted with several interesting episodes, some of which were dwelt upon by renowned architect-academic George Michell during a session at the Jaipur Literature festival on Monday.

Dr. Michell, an expert on Central Asian and Indian-especially Deccan-architecture, was introduced by historian-author William Dalrymple for a session titled “Vijayanagar: the city of victory”.

Dr. Michell received his training in architecture at Melbourne University and then went on to do a Ph.D in Indian Archaeology at the School of Oriental and African Studies (SOAS), University of London.

He has undertaken research projects at different archaeological sites across India, including over two decades of intensive field work at Hampi. His recent publications include Vijayanagara: Splendour in Ruins, The Great Temple at Thanjavur and Mughal Architecture and Gardens, among several other books.

Dr. Michell said Vijayanagar was among the earliest and perhaps the most complete examples of magnificent imperial cities and one of the very few Indian cities that were abandoned.

The most amazing thing about the place, he said, was the landscape.

“It is one of the most extraordinary landscapes to be found anywhere in Asia, not just in India…incredible granitic landscape... one question that most people ask us is what the hell is a big imperial city of one of the greatest Hindu empires in southern India doing here? Why did they build it here?

There are several possible explanations-one, this type of landscape was a very good natural defence against empires that were at war with Vijayanagar; second, a great river, Tungabhadra, runs through this place…and it loses height… ideal for taking off water channels and creating a very extensive hydraulic system…which permitted the cultivation of many types of crops,” said Dr. Michell.

thats where we were last year such an amazing & lifetime memories with us and preservation of this place is really satisfying in the whole visit !

Nice tourist destination. In addition, an ancient " Virupaksha Temple " complex with an attractive tall tower is there, welcoming devotees/ tourists. Lovely handicrafts are sold in the Car Street, attracting tourists

I did a workshop with George Mitchell & John Fritz on Deccani architecture last month. I asked them about the Muslim sultanates vs Hindu Vijayanagara thing. He said that is false. The Deccan sultanates had lot of Hindu soldiers and Vijayanagara had muslim soldiers. It was more a battle between the kingdoms for Raichur doab, than Hindu vs Muslim. After Talikota, sultanates started fighting among themselves again. Also, Vijaynagara had to be abandoned as it was situalted too close to the "international" border and was very vulnerable.

Akshay Chavan: I had the equal pleasure of having dinner with these two extraordinary gentlemen last night. What did you mean by the 'international border'?

The disfiguring of idols and figurines were actually done by cowherds and vandals. Some rotten historian had brought in the hindu-muslim angle and it stuck. Infact, many bahamani sultans were scholars and poets of great calibre and well versed in Urdu, Persian and Kannada. Men would join whichever king's army who would pay them better. That is how the English could get a good army by paying better salary.

I am avid reader of Vijayanagara history. I wrote few articles on it. http://madhvahistory.com/index.php/my-profile-cp/13-member-articles/accounts-of-empires-kingdoms/39-battle-of-talikota-completes-450-years http://madhvahistory.com/index.php/madhva-history-ebooks/14-member-articles/inscriptions-manuscripts/23-inscriptions-of-vijayanagara-an-invisible-dharmik-continuum-of-dynasties

Raghothama Rao C I wanted to understand one thing. After the defeat at Talikota, why did the defeated army not barricade themselves in Vijaynagara? They could have endured siege for months. Why did they abandon it to the mercy of the invading army?